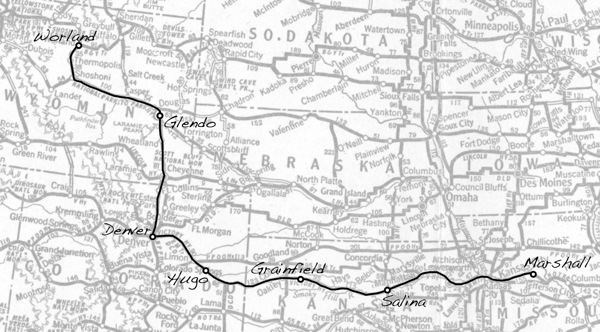 I left Marshall at 4:00 a.m. on a hard dirt road. Nothing went wrong until I hit Kansas City. I took a bad spill, tearing up my knee a little. I met a fellow on an Indian Scout from N.Y. State at Topeka, Kansas and rode the rest of the day covering 280 miles. We stayed in a barn just east of Salina. My new partner is going to Limon, Colorado with me and going on to San Francisco alone.

Leaving Salina early with Brown of New York. We had good hard dirt roads most of the way. There were deep ruts and we both took three hard spills bruising us up a little. We covered 210 miles and stayed in a barn east of Grainfield, Kansas. Today we have been going up a slight grade for 150 miles with wheat fields on both sides.

My side partner with the Indian:

I had trouble with my front wheel and was detained in Grainfield until about 10:30 a.m. The rest of the day we rode fast over good dirt roads. The road all day has been a little uphill. The altitude of Hugo is about 4000 feet above sea level. We rode 205 miles and stayed in a barn overnight. I am now running on Mountain Time.

We left Hugo, Colorado about 4:30 a.m. [and rode to] Limon, Colorado where we had breakfast and separated, Brown going to Denver and I to Colorado Springs. From Limon to the Springs I had fairly good roads. I arrived at the Springs at 9:30 a.m. and started at once to see all there was to be seen. First I went to the Garden of the Gods, which is about seven miles from the Springs. The Garden is made up of a natural formation of curious rocks. Some of the rocks have been worn and carved by the winds and water that they look like images of animals. The Garden of the Gods is about a mile square. From there I went to the Cave of the Winds and then took the road to Pike’s Peak. On arriving at the entrance to Pike’s Peak I was told that it was impossible for me to go only a few miles up the highway as the snow was too deep. Yesterday I was told they had a skiing contest near the peak. From the highway I went to the Seven Falls which is a continuous falls striking level places seven times before getting to the bottom. I then left Colorado Springs (5 p.m.) and headed for Denver, Colorado, arriving at Denver at 9:15 p.m. During the day I covered 180 miles. I am staying at the YMCA here. I ran around Colorado Springs about 30 miles. The road between Colorado Springs and Denver has an altitude of between 6,300 and 5,200 feet. The altitude of the Springs is 6,200, Denver 5,200, and Pikes Peak 14,192 feet at the top.

Altitude of Denver 5,300 feet I left the Y. at 9 a.m. to see the city of Denver, Colorado. I toured around until about noon and then started for Lookout Mountain. Buffalo Bill (William F. Cody’s) grave is at the summit of the mountain about 25 miles West of Denver. The road leading to it is not very steep but it takes a good car to take it in high. It is uphill for about 10 miles. They have a museum at the top near the grave and a monument which has Buffalo Bill’s guns and relics. It also has paintings of him and his battles with the Indians and buffalos. It has a number of pictures of him on the stage and of the Wild West Show. I think the site of his grave is the most beautiful place I have ever seen. On one side [are] the snow capped mountains and [on] the other – in the valley below – Denver.

Arrived here last night at 8 p.m. Mountain time. Yesterday I got to Colorado Springs about 9 a.m. in the morning and toured all around there. I went to the Cave of the Winds, the Seven Falls, the Garden of the Gods, and Pike’s Peak. I could only go up Pike’s Peak 14 1/2 miles because of the snow. The road is 19 miles to the top. They had a skiing contest up there June 8/24. The snow is 10 ft. deep on the sides of the road. The peak is 14,109 feet high. I saw so much I don’t know where start at. I sent all the different kinds of postal cards I could get ahold of to you yesterday (don’t forget to tell me on your next card whether you got them or not, and keep safe from Mack. Today I got up at 8 a.m. and have been touring around to the Denver Mountain Parks. This morning I went to Buffalo Bill’s (Wm. F. Cody’s) grave on top of Look Out Mountain. It is about 20 miles from (west of) Denver and uphill most all the way. On one side you can see the snow topped mountain and on the other side about 10 miles below [is] Denver. It is the prettiest place I have ever seen, and I have seen a good many pretty places. The altitude of the grave is 8,000 feet (Denver 5,200 feet).

The roads and weather from Baltimore to St. Louis were perfect. I went on the Mat at St. Louis at 8:30 p.m. and lost by a decision in 36 minutes after riding my motorcycle 177 miles that day. I am going to wrestle tonight at a local affair in the YMCA and think I will win. I feel stronger than ever before. And I never ate so much in my life. At any YMCA [I] am working out in the gym an hour or so to keep in condition. I shaved this morning for the first time since I left Baltimore. I looked like a bear. Today I saw a wild cat in the trees about 100 yards away and took a picture of it. I also saw several stuffed ones in the museum at Cody’s grave.

When I left St. Louis, I had just mud roads because it had been raining on for 3 weeks. I had a few spills and a little trouble with my cycle but came through on top and wide open. My motor works even better now than when I left. I put a new tire on the rear today. Thru Kansas the roads were fair on the Union Pacific Highway. The roads of Colorado so far have been hard dirt and gravel. My hand is tired now and I’ll close saying I’m all right and couldn’t feel better. I haven’t noticed the height yet.

P.S. Address mail to Salt Lake City for a while, until the 16th and, then to Los Angeles, Cal. both General Delivery. Send my suit and a good shirt right away to General Delivery Los Angeles, California. If it doesn’t cost too much, send my shoes. I don’t care if I get the shoes or not. I am going to Yellowstone Park from here and if you just send [mail] as soon as you get this to Salt Lake City I will get it.

Leaving Denver about 10 a.m. I had good luck and cement roads for about 30 miles. The rest of the road through Colorado was gravel and sand. The roads through Wyoming so far have gravel and hard dirt. The country in Wyoming is very hilly and more like a racer dip than any- thing else. All the roads average over a mile in altitude. The cowboys of other states always dress in old clothes and overalls, but in this state they most all dress like movie cowboys with floppers, high heel boots and red flannel shirts. I slept in a barn about 3 miles north of Glendo, Wyoming. Moto-Cycle running fine. 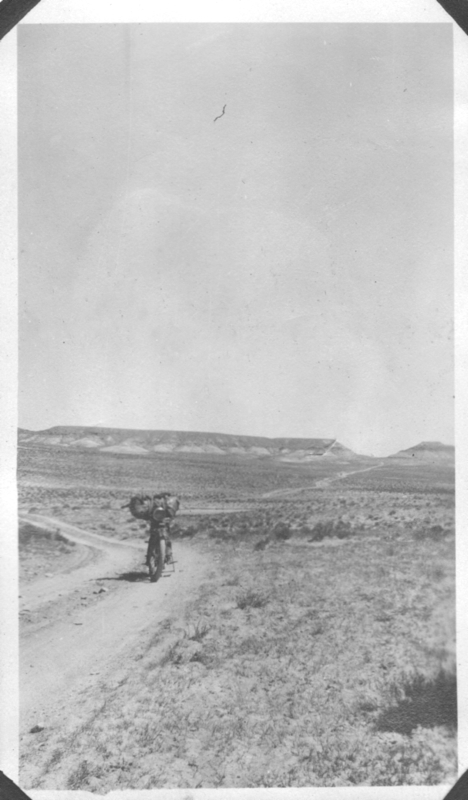 Left Glendo this morning at 4:00 a.m. and had good roads until I got to Shoshoni, Wyoming. At that place the bridge was washed out and I had to cross on a railroad bridge, a distance of about 1/2 mile. From there the roads were mostly sand and loose dirt. I passed through Wind River Canyon which is a very pretty place with bad roads. I also saw the small basin called Hell’s Half Acre, which about 1/2 acre of badly broken up ground about 100 feet deep in places. I covered 264 miles.