Motored to the Pacific

The following article about Phil’s trip was published in the December 1924 issue of Trolley Topics, the Baltimore transit company’s employee newsletter.

“I guess the only thing that stopped me was the Pacific Ocean,” declared Phil Gooding the other day when he was discussing his motorcycle trip to the coast and back.
Phil, or rather Phillip N. Gooding, is a Baltimore Transit Company man. Along towards the end of last May Superintendent Martin told Phil that he might have a vacation, and the young man, who had always had an intense desire to see some parts of America, decided to hop on his trusty motorcycle and go from one end of the land to the other. So, on May 30th he started on the trip that was destined to occupy 65 days and to cover 9,478 miles. It was an adventure full of interest, and excitement.

Leaving Baltimore, Gooding went across the Alleghenies, and over the fine roads of Ohio, Indiana and Illinois. It was not until he had left St. Louis that he ran into “gumbo” mud, and in an experience with this he met his first mishap. He burnt out his clutch at a stretch of road 12 miles from Columbia, Mo. It looked as though he was in for a long walk, pushing a heavy machine over a heavy road, but happily he came upon a gang of road workmen. They had a mule, a white mule, and they agreed to hire the mule and a rider to Gooding for $10 to tow him into Columbia. There repairs were made at a garage and the trip was continued.

Gooding left the National Highway at Kansas City and went north to Topeka and then followed the Union Pacific Highway which is along the trail used in the early days by stage coaches, across the state of Kansas into Colorado. “The road across Kansas was all dirt,” says Gooding. “But as it was graded and hard I made fairly good time. The road over Western Kansas is very mountainous and going west it is a slight grade all the way into Colorado. I arrived at Colorado Springs, which is at the bottom of Pikes Peak on June 9th.
“I spent the day touring through the Garden of the Gods and going up the Pikes Peak Highway to the summit of the Peak. The Garden of the Gods is a large reservation of queer rock formations. Most of the rocks are brown in color and very brittle. The wind and rains have cut them into images resembling animals’ heads and bodies. “The road to the summit of the Peak is 18 miles long and very steep in places. From the top you get a beautiful view of the surrounding country and of the highway that you have just come up twisting back and forth up the mountain side. There is snow on the Peak both winter and summer and it is very cold. The Peak’s altitude is 14,108 feet.

“The next morning I left for Denver, and after touring the city I went to Lookout Mountain, which is about 20 miles distant. The grave of Buffalo Bill (William F. Cody) is at the summit, and also a large museum containing his guns and relics of his Indian fighting days and of his Wild West Circus. To the west of the grave are to be seen the snow-capped peaks of the Rockies and on the east Denver in the valley below. The altitude of the grave is 7,700 feet above sea level.

“The roads through Colorado are mostly all gravel and in fairly good condition, but the state of Wyoming does not keep them quite as good. At Shoshoni, Wyoming, the auto bridge over a small river was washed out and I had to push my motor over a railroad bridge for about a half-mile. As railroad ties and motor-cycle wheels were not built to run together, it wasn’t much fun.

“After crossing the bridge, I struck the first stretch of desert. It was only 16 miles across, but it was so sandy that it took three hours to cross on my motor-cycle.
“The road from Cody to the entrance to Yellowstone Park is 60 miles and runs through the Shoshone Canyon which averages 1,500 to 2,000 feet deep and 200 to 500 feet wide. The Shoshone River runs through it. The river has been dammed in the canyon for irrigation purposes. The dam is 328 feet high and 200 feet wide. It irrigates 300,000 acres of land.

“I arrived at the Yellowstone National Park on the afternoon of June 14, and camped for the night near Yellowstone Lake, 7,800 feet above sea level.
“The lake is fairly alive with large rainbow trout and is a real fisherman’s paradise. The Yellowstone, with its wonderful variety of falls, canyons, lakes, geysers is the most wonderful place in this country.

“Most of the park is volcanic and has acres of ground which is full of holes giving off gases and steam. There is a small mud volcano which bubbles up mud and steam. The mouth of this volcano is about 10 feet across. There are several geysers which shoot up hot water and steam. The largest of these is ‘Old Faithful.’ Every 55 minutes ‘Old Faithful’ shoots up steam 165 feet in the air, and keeps this up for about three minutes.

“After three days in Yellowstone Park I took the highway south into Pocatello, Idaho where I got on the old Oregon Highway which was used by the first Oregon wagon trains, through the cities of American Falls, Burley, Twin Falls, and Mountain Home to Boise, the capital of Idaho. The roads are very bad in places across Idaho, and there are distances of 40 to 50 miles between houses. It is the northern part of the Great American Desert.

“Near Twin Falls I crossed the Snake River on the highest suspension bridge in the world.
“From Boise I went by the way of the Oregon Highway to Pendelton, Oregon, then took the Columbia River Highway into Portland, Oregon. The Columbia River Highway follows the Columbia River for 150 miles. The road is never more than 100 yards from the river, sometimes being on the shore, then on the cliffs 300 feet above the river. It has several water falls that are 300 feet high. It is considered the most beautiful highway in the United States.

“After touring Portland, I took the Pacific Highway south through the state of Oregon, into California, the land of palms and oranges. At Vallejo, California, I took the ferry for San Francisco. I was at the Presidio when Lt. Maughan arrived from New York by airplane, flying from dawn to dusk.

“Chinatown in San Francisco is about seven blocks long and two blocks wide. I went on a sight-seeing tour there which included a trip through two blocks of tunnels leading into deserted opium dens.

“Leaving San Francisco on June 26 I headed for the Yosemite National Park in the Sierra Mountains. The climb into the park is over fairly good roads with 25 percent grades, just wide enough for one auto. The road is cut into the side of the cliffs and is very dangerous. A slip means a drop of 3,000 feet.

“I arrived in Los Angeles on July 1, and during my week’s stay there visited Pasadena and Berkeley Hills. In Hollywood and Berkeley Hills most of the moving picture stars live. They have the most beautiful homes I have ever seen. Most of them are bungalows with palm trees growing all around. The rose and flower gardens are very pretty. On July 4th I went down to Tijuana, Mexico to a real bull-fight and rodeo.

“I left Los Angeles July 8, for the Grand Canyon of Arizona across the Great American Desert. The first 100 miles from Los Angeles to Victorville is paved, but the rest of the way across was sand. I had a great deal of trouble riding through the loose sand and could only average about 5 miles an hour.

“When I got about 50 miles east of Victorville, the road was so sandy and rough that it broke the frame of my motor-cycle and front spring. As I was fifty miles from the nearest garage or house, I had to wait in hopes some passing tourist would have enough wire to hold the cycle frame together.

“It was 4 p.m. when I broke down, and I had to camp for the night on the desert all night. At 7 a.m. an autoist came along and supplied me with the much-needed wire. I spent the second night on the desert near Needles, California. At 10 a.m. the next morning it was 120 degrees in the shade and very little shade. Crossing the Colorado near Needles, the road starts rising until at Flagstaff, Arizona, which is near the Grand Canyon, the altitude is several thousand feet.

“There are very few towns on the desert and they are about 50 to 60 miles apart. At Flagstaff I repaired my motorcycle and got my first drink of good water since leaving Los Angeles. I had to weld my cycle’s frame myself, and used just about twice as much material as an expert welder would have found necessary, but the job was so well done that the machine brought me all the way home without another break.

“I arrived at the Grand Canyon July 11 at 10 a.m. The Canyon is over a mile deep and 13 miles across. There is a very narrow foot and mule trail leading from the top to the Colorado River at the bottom.

“I walked seven-and-a-half miles down the Bright Angel Trail to the river. The trail is so steep that it is hard to keep your feet and most of the time you slide instead of walk. In most places the trail is about 3 feet wide and a slip means a drop of a few thousand feet. Halfway down the trail is a spring of good water and several small buildings. The Colorado River in the canyon is about 75 feet wide and very muddy and swift. After taking several pictures at the bottom I started on the way up. It took two hours to go down, but took me ten hours to climb up. During the day about 50 people on mules went down into the canyon and few hikers. It was 15 miles of hard walking, but the scenery is well worth the trouble.

“I stayed at the Grand Canyon three days, and then started east on the Santa Fe Trail by way of Holbrook. Eighteen miles east of Holbrook is the Petrified Forest. There is a road about two miles long through the forest and a small museum. Some of the petrified trees are very large, but are broken in pieces of five to fifteen feet long. I got several specimens of wood and bark and brought them home with me.

“During this trip,” says Gooding, “I traveled alone on an Indian Moto- Cycle and camped out most every night. Most of the time I camped on public camping grounds near towns and cities, but if I could not get to one of these by night I camped wherever night found me. In most large tourist camps would be autos from most every state in the Union, and every night it was not unusual to see 50 to 100 tourists assembled around a huge campfire singing songs and telling stories and jokes. The average tourist is very congenial and always ready to help a fellow out of road troubles and in giving information concerning road conditions. I had a wonderful trip, but I must say that there is no place like one’s home town.

“Going again?” we asked Gooding as he finished the narrative of his wonderful trip.

“No” He answered. “It was a wonderful experience, and I would not take anything for it, but I do not propose to do it again, in the same way, at least. 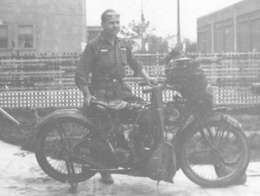 Phil and his Indian Scout at the end of his trip.