I left Raton, New Mexico at 6 a.m. and went over Raton Pass which I thought was going to be hard pulling. I didn’t have any trouble at all. It was a small hill compared to the mountain passes I have been over. The summit is 7,888 feet high. The roads today have been fairly good but rough in places. Arriving at Colorado Springs I saw Pikes Peak for the second time in the distance. It still has snow on the peak. I am camping out tonight.

Young Men’s Christian Association
Public Correspondence Room
Colorado Springs, Colorado
July 19, 1924
Dear Pop and Ma:
I left Raton, New Mexico this morning and came over Raton Pass. It was just a little hill compared with the mountains I have been over. Arriving here at Colorado Springs completes my circle of the West. I am going to Denver tomorrow and then head northeast for the Lincoln Highway in Nebraska. Going that way will be much further but it will take me through states I have not yet seen and over better roads I think. They say the roads in Missouri are very bad. I am not going up Pike’s Peak as I guess it is about the same as it was when I went up it in June. You can still see lots of snow around the top of the Peak.
My motorcycle is running fine, and I think it will go the rest of the trip without any trouble. The tires I have on it will last the full trip and then some. I have been camping all the time, as it is just as well as paying for a hotel every night. You have to pay $1.50 and $2.00 for a room out here, and then only a few are clean. I now have a double blanket and a single one. It doesn’t get very cold here. Dropped to about 45 degrees in the night. The roads from here to Chicago are fairly good they say.
If all goes right I will be at Niagara Falls by Aug. 15, maybe sooner. When I get to Chicago I will leave the Lincoln Highway and follow Lake Erie around by way of Toledo, Cleveland, Ohio Erie and Buffalo, N.Y. and then to the Falls. It won’t be much further and then I’ll have seen it all, and “I don’t mean maybe.”
I hope you can go up there and spend a couple weeks. I might get up there sooner if you go, and then I can stay until Aug. 18. I want to be in Balto Aug. 22 and Betterton (24). Please write right away to Chicago Heights, Illinois and say whether you are going and when you will get there. I am having a good time. I sure wish you could have been over the same places I have been lately.
Your son,
Phil
PS Going out to Los Angeles I covered as close as I can figure on my government maps West bound 5,515 miles (so far) east bound 1,569 miles. Total miles so far 7,084, 18 states and Mexico. I will add a little more mileage and some states before I get home.
Phil

I left Colorado Springs at 9:00 a.m. and went to Denver and then took the DLD highway [Detroit-Lincoln-Denver] by way of Brighton, Colorado to Ft. Morgan. At Brighton I turned my back on the Rocky Mountains where I have had the best part of my trip. Leaving these mountains and the country west of them was just like leaving an old friend. I could see them for quite a long ways, but the last 15 miles I could not even make out their outlines. I am now on the prairie but at a high altitude. I am camping out tonight.

I left Ft. Morgan early and had fairly good roads until I got to the Colorado, Nebraska state line. From the state line [to] here I had very rough roads and some mud with deep water holes. In Nebraska here it is harvest time and they have wheat fields miles long. I had a spill today but I’m not hurt much. I am camping tonight. 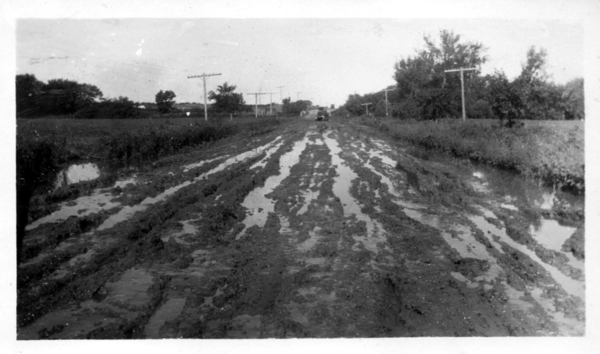 The Detroit-Lincoln-Denver (DLD) Highway outside of McCook, Nebraska

I left McCook at 5:00 a.m. and had very rough roads for 150 miles. In one place I had mud and water 2 feet deep. The last 100 miles was fairly good. This is Nebraska’s rainy season and I am very lucky to find the roads as good as they are. They had a flood here about a week ago and it is just drying up. I hope to be in Iowa tomorrow night. If it has been raining recently I will have bad roads there too. I am camping tonight.

I left Lincoln early on the D.L.D. highway and went to Omaha, Nebraska and crossed the Missouri River into Iowa. Earlier I crossed the Platte River in Nebraska. The roads have been very rough but no mud. There have been a few stretches of paving, about 30 miles in all. I am camping tonight. My motorcycle is running better than ever. There has been a lot of detouring today and I had to go about 35 miles out of the way.

It rained all of last night hard but I had shelter and did not get wet. It made the roads very muddy and slippery, but I started out at 10 a.m. and made fairly good time considering the condition of the roads. I took one right hard spill but [it] did not hurt much. I sprained my wrist, but it will be all right in a couple of days I guess. I am camping tonight. I had several detours today.