I got up at 5 a.m. and started down the Bright Angel Trail at 6 a.m. Walking the grade was very steep all the way and very hard to stay on your feet. The trail in places is only 3 feet wide and if you slip it means quite a drop. The trail to the halfway house is 3 1/2 miles and very steep. From there for about a mile the trail has only a slight grade and some level places, but from there to the bottom, which is 3 1/4 miles the trail is very narrow and steeper than the first. The grades are 35 to 45 percent grades. There is good spring water at the halfway house and at the bottom. I went down in 2 1/2 hours. The coloring and ruggedness of the canyon going down is beautiful and very hard to try to explain because anyone not seeing it cannot imagine its beauty.
The Colorado River at the bottom is a rushing torrent about 100 feet wide and in places 500 feet deep and very muddy. I got to the bottom about 8:30 a.m. and went in swimming for about an hour. I stayed at the river until 1 p.m. There were about 40 people who came down on mules and one man who walked but he was going to stay down 2 days to rest up for going back. I left the bottom at 1 p.m. and arrived at the top at 9 p.m. and it was some climb. The mules take 5 hours to come up. The trip down and coming up was very hard to make but I wouldn’t take anything for my experiences on the trip. If I ever see the Grand Canyon in the future it will be from the top. The round trip was 14 7/8 miles and it seemed 114 7/8 miles before I got to the top. The people who go down on mules are about as tired and sore as I was when they got to the top. They use full grown mules to carry people. 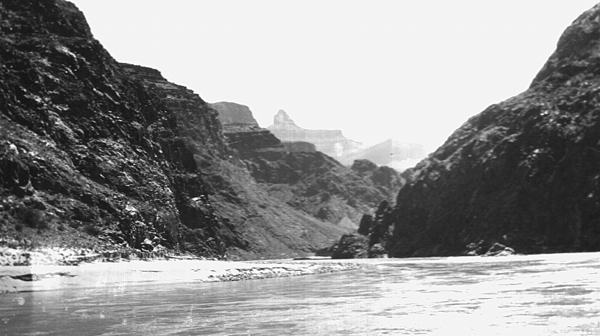 The Colorado River at the bottom of the Grand Canyon.

I got up this morning at 7 a.m. and was so stiff and sore I could hardly move, but I started out and saw the rest [there was] to see. I took the Hermit Rim Road to Hermit’s Rest passing Hopi and Mohan points to the head of the Hermit Trail. I then took the road back to the El Tovar Hotel and took the trail around to Grandview Hotel and then to Hances Cabin. The trails I took gave me very good views of the best part of the canyon. I am camping tonight as last night, in the same place. In the afternoon I went and heard the Kolb Brothers lecture on their trip down the Colorado River through the canyon and also the Indians Dance in front of the El Tovar Hotel.

I left the park at 9:30 a.m. and went to Maine, Arizona, then took the National Highway east and had very rough roads most all the way. The road was hard all the way. Just before I came into Holbrook I had to go across a creek where a bridge was washed out. It was about 5 inches deep. I am camping out tonight.

I left Holbrook at 6 a.m. and went to the Petrified Forest, 18 miles from there. There is a road 2 miles long through the forest and they have a small museum in it. Some of the petrified trees are very large in diameter but all are broken in lengths of 5-15 feet. I got some pieces of the wood and sent some by mail home. The road was fairly good all the way except for the last five miles which was muddy. In several places I had to cross 6 inches of fast running water on the highway. This is the rainy season in this part of the country and I am liable to have rain most every day. I am camping tonight. 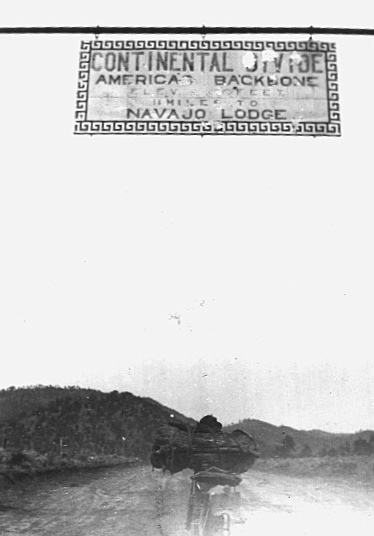 I left Datil, New Mexico early and had a hard gravel road clear to Albuquerque except for a few sandy places. Most of the road followed the Rio Grande River. I arrived in Albuquerque at noon and worked on my motor-cycle a couple of hours tightening it up. I am camping out tonight.

I stayed in Albuquerque until 1:30 p.m. resting up and waiting to get some pictures that were being developed. Albuquerque is the largest city in New Mexico. The road here is fairly good. It started to rain when I got here, and it is very cloudy all around. The roads are all slippery. I am going to camp here tonight. 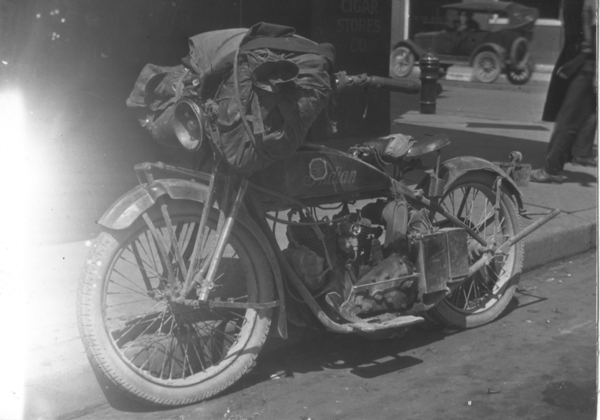 I left Domingo, New Mexico early on very muddy roads going over the La Bajada grade which is a long mountain pass with hair pin curves. After leaving Santa Fe I had hard roads but very rough through Las Vegas and Springer and then to Raton, New Mexico. I was stopped in Raton for speeding but talked the cop out of it. I am camping out tonight.