I got up early and went down to the Post Office and got 3 letters. I then went out to Hollywood and went through the William Fox Movie Studios. It is some place. There were parts of several cities and towns in there and plenty of lumber. From there I went to Long Beach. It is about like all the other beach cities, only the beach is a little longer. I am going to the theater tonight.

300 miles
I left Los Angeles about 4:30 a.m. for Mexico. The road was very good but hilly. I had to register when I crossed the border and when I came back. The races were not at Tijuana now but most of the gambling dens were open and I got a good idea of how the place would be in full swing. There were about as many Americans there as Mexicans. I did not stay very long and then headed back by way of San Diego. San Diego is a good sized city, and worth seeing. Leaving San Diego I took the road back and went to the theater in the evening.

I got up early and went down to the Post Office and then came back and packed my clothing to send home and my bags to take on my motorcycle. I received a letter giving Ed Klopples address and went to see him. I have everything ready to start early tomorrow morning.

I left Los Angeles at 7:30 a.m. and headed east for the Grand Canyon. The roads to Victorville were paved but from there it was nothing but desert and desert roads. The going was rough and sandy and it was awful hot. It was 115 degrees in the shade and the shady places [were] 50 and 60 miles apart. I covered 195 miles and had a couple of spills but [they] did not hurt me much. I broke a spring on my seat and my front fork but I wired them up and it runs. I can’t get them fixed for about 800 miles. Camping out.

I left Ludlow at 4 a.m. on very bad desert roads. There were places where the road was fairly good for a few miles and then it would get very bad and sandy. The thermometer at Needles, California was 128 degrees in the shade and I don’t know how hot in the sun. I crossed the Colorado River about 15 miles south of Needles. The river at this point is about 75 feet wide and 60 feet [deep] and runs right fast. They fumigated me and my motorcycle when I crossed the river. The road so far in Arizona has been fairly good. I covered 150 miles today. Needles and vicinity is 10 degrees hotter than any place spoken of in the Bible. I am camping out tonight.

The bridge over the Colorado River at Needles, California

I left Oatman, Arizona at 5:30 a.m. on good gravel roads. The roads all the way to Maine [Arizona] here were good. I stopped in Williams, Arizona and had my front fork welded that I broke coming across the desert and then came onto Maine and camped for the night. It seemed I just ran ahead of a storm all day. I came through Seligman, the place where the time changes 1 hour ahead to Mountain time, at 12:30 p.m. and at 2 p.m. they had a cloudburst that washed bridges out and won’t be passable for several days, if then. They say it rains here every day and I will have hard going through the mud for the next 800 miles. The roads are so muddy from here to the Grand Canyon that I’ll have to wait till they dry a little before going on. 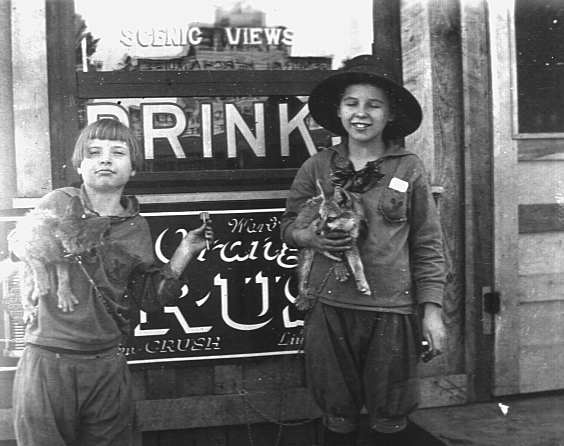 July 11, 1924
Maine, Arizona to Grand Canyon Park, Arizona
65 miles
Altitude 7,000 feet
I left Maine, Arizona this morning at 9:00 a.m. and took 3 hours to come to the Grand Canyon of the Colorado River over very rough and muddy roads. The Canyon is much prettier than I ever imagined. The coloring of the rock strata and the shadows make it the canyon incomparable in both size and beauty. They have a large hotel and railroad station here and several stores. I am camping out. The trail down to the river is 7 1/2 miles. I am going to go down it in the morning if nothing happens to my feet. They say it is a bad climb back, but I think I can make it. I’ll try, at least. 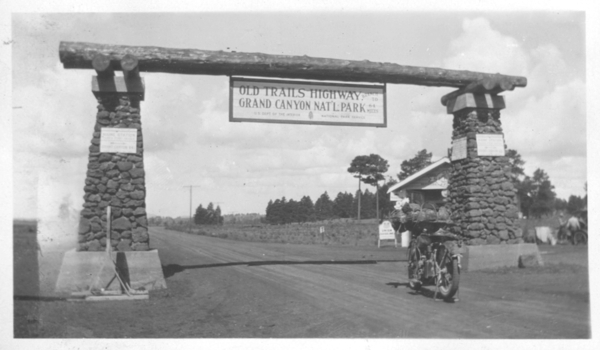