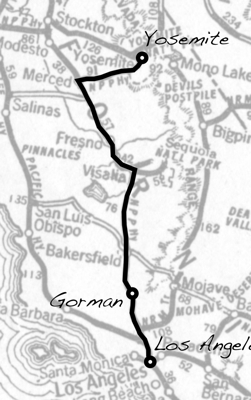 I intended going in swimming this morning in the Merced River, but it is like ice. It runs over and past Glaciers further up the [way] into the mountains. I started out to see the Park at 8:00 a.m. Leaving my camp on the Merced River I took the road to the museum where they have old curios found in the Park. I then took the road up along the wall of the valley to Mirror Lake, which is a small body of water which reflects things like a mirror. I then came back over the Tenaya Bridge past the Half Dome which rises 489 feet above the floor of the valley. I then went to the Happy Isles which is a river rushing over small islands. I then went back to the village past Glacier Point. I toured around and saw the Yosemite Falls, the Vernal Falls, the Nevada Falls, and the Bridal Veil Falls. I am camping on the Merced River again tonight. The altitude of the floor of this valley is 3,950 feet. The half-dome is 8,852 feet. Glacier Point 7,214 feet. The Yosemite Falls fall 2,565, Bridal Veil 620, Nevada 594 and the Vernal 317 feet. 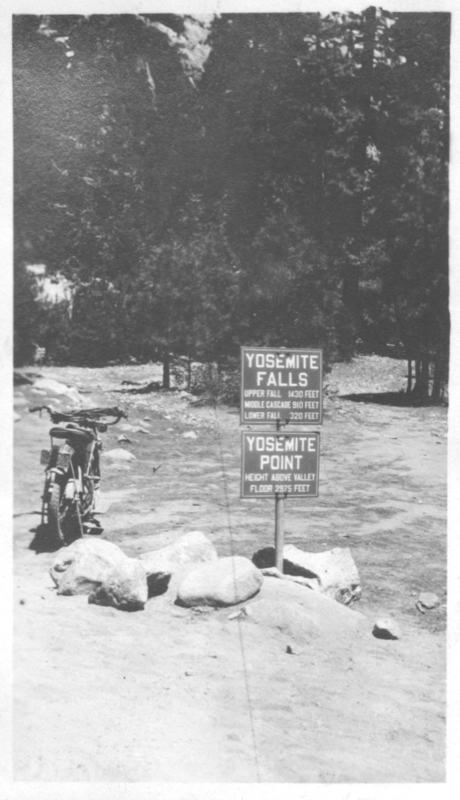 I left the park about 5 a.m. and headed for Merced, California. The road was very rough and hilly until I got to Merced. At Wawona, California I turned off and went up into the Forest of Big Trees. They are everything they are cracked up to be and as big as even two of them [have] the road run right through [them]. From the Big Trees I went back to Wawoma and then to Merced where I got on the highway to Los Angeles. The road was well paved and I got to Gorman, a small town 60 miles from Los Angeles, and made camp about 5:00 p.m. I covered 345 miles.

I left Gorman early and got to Los Angeles by 9 a.m. It is Sunday and I could not get my mail so I hunted up Miller. I soon found him and we both went down to the beach in a hired Ford and went in swimming in the Pacific Ocean. It was about like the Atlantic only a little better. From there we went to Hollywood and saw a good many pretty homes some of them the homes of movie stars. I also passed the home of Jack Dempsey, in Los Angeles, it is a regular palace. We went to a show at night. I am living with Miller at 1158 N. New Hampshire Ave. I have covered 5,135 miles so far

All day I have been running around seeing the town and seeing the homes in Hollywood and Venice. They are the most beautiful homes in the country. It seems that this city is mostly owned by movie people. I also went to the Indian Agency to see about having my motor overhauled and then went to the California Auto Club and found out about the roads in Eastern California and Arizona to the Grand Canyon. They said the road was passable but dangerous, so I guess I’ll take the chance and go across. I am going to have my motor overhauled first. I think I’ll stay here about a week or ten days.

Los Angeles, California
June 30, 1924
Dear Pop and Ma:
I received all your letters today out of General Delivery and was sure glad to get them.  I got the box, too.  After leaving the Yellowstone Park they told me the road by Salt Lake City was too bad  so  as I wanted to see the North I took the Old Oregon Trail down through Idaho.  It was about 600 miles out of my way but the scenery was worth the difference.  The roads in Idaho were awful, but when I hit the Columbia River Highway in Oregon I had good roads right into Portland.  The road runs right along the Columbia River. It is worth seeing.  From Portland I took the Pacific Highway south to San Francisco.  The road was all paved but 100 miles from Redding, Cal to the Oregon line.  I stayed in San Francisco till I got tired of it (1 1/2 days) and then hit the trail for the Yosemite National Park.  The road to within 75 miles of the Park is paved, but the rest is dirt roads but passable.  The roads up through the Sierra Nevada Mountains into the Park have grades of 20 to 25 miles uphill with an average of 16 to 18 percent grade.  In some places the road is steeper than the driveway in the Republic Garage and long.  The road for miles is just wide enough for 1 car, with places wide apart for a turn around.  Everybody seems to drive right careful and I have seen very few accidents in the bad places.  I got along fairly good but the road was right rough and dust in places 4 or 5 inches deep.  Going down the grades I would hook my rear rope to a car behind (anything with 4 wheel brakes) so he could hold me.  In low gear with my motor cut off and all brakes I could not hold it slow enough, and it was too much of a fall to take chances.
My motorcycle could not have run better the whole trip.  I went on the Indianapolis Track the day after the race and turned the 2 1/2 miles track in 2 minutes and 43 seconds and I mean that’s rolling.  When I got into a county about 30 north of Los Angeles) there was a mile measured off on level road to test the speedometer and I went over it in 1 minute 6 seconds, which is only a little slower than she ran on the Indianapolis Track, and that’s good after covering over 5,000 miles without having anything done to it at all.  I think I averaged about 65 miles a gallon of gas.  In Los Angeles here you can buy gasoline for $.12 a gallon and that includes a $.03 state tax.  In Palouse, Wyoming I paid $.63 a gal. for gas.
I am going to the auto club here this afternoon and see if I can get over the desert with my motorcycle.  If I can I am going to have it overhauled and ride it home.  It sure is a hard looking critter now, you would hardly know it.  I have found out where the Magnetic Hill is and I am going out to see it before I leave.  I am going to a real Bull Fight on the 4th of July.  I was going to a rodeo on the Fourth but I have seen a lot of that in real life in Wyoming and Idaho.  I think I have about run out of something to write so I will close.
Address all mail after you get this to Williams, Arizona.  I am going to stay here a week or ten days.  Staying with Miller.
I am well and feeling fine.  Hoping you are just as well.
Phil

I did not get up until about 11 a.m. but most all afternoon I was traveling around on buses and street cars seeing the city and Hollywood. In the evening a friend of Miller’s and Miller and I, took some girls and went riding out through Hollywood and Beverly Hills passing on the way some beautiful homes and studios. We also went to the Magnolia Hill. It pulled the Nash car we were in with 6 [people] in it at the rate of about 5 miles per hour. It is about 200 feet long. This is the first day I have not ridden my motorcycle since I left Baltimore.

I got up about 10 a.m. and went down to the Post Office, but did not get any mail. I then walked downtown and took the car for the beach. The beach nearest Los Angeles is Venice and I went in swimming and stayed almost all day. I then took the car back to L.A. and went to the theater in the evening with a bathing queen I met on the beach.

I got up early and took my motorcycle down to the Indian Agency and had the valves ground and the carb cleaned. While they were doing it I went down to the beach and went in swimming. I am going to the theater tonight. I received a letter from Pop and Ma by Air Plane but it did not get here much sooner, about 2 days.

I went to Topanga Beach about 10:00 a.m. and saw a real Bull Fight and Western Rodeo. It was sure great and worth seeing. There was about 10,000 people there. It was a regular gambling ranch. They had a Monte Carlo and dice and card games. In the evening I went up to Venice and went in swimming and then watched the fire works until 11 p.m. It was a great day. The best 4th I have ever seen.