I left Baker at 8 a.m. and arrived in Portland at 7:30 p.m. Had good roads. The last 150 miles was over the Columbia River Highway which runs right close to the Columbia River. Was at no time more than 100 yards from it. Sometimes the road is 400 to 500 feet [above] the river on the edge of the banks and then again it dips to the shore. In several places there are very large waterfalls, one that falls about 200 feet. The road in several places runs through tunnels into the mountains. It’s a very beautiful Highway and fully worth the five hundred miles I came over to see it and Portland. I covered 342 miles today. Am camping out.

I got up at 7 a.m. and toured around Portland until 12:30 p.m. I went over the Interstate Bridge which crosses the Columbia River and connects the states of Washington and Oregon. The bridge is about 1 1/2 miles long altogether. The river is nearly a mile wide at this point and deep enough for an ocean liner to come up from the Pacific Ocean. Leaving Portland I went over the Pacific Highway to this place. The road was all cement except a place of gravel about two miles long. I crossed a river into Junction City on a ferry. I bought a new tire for the front wheel today. I am camping tonight at the Eugene camping grounds. It’s the best camping grounds I have seen. They all charge admission. P.S. I went to the barber shop today to get shaved this morning, and believe me, if I lived here I would never shave myself.  <i>Some Barber.</i>

I left Eugene about 9 a.m. and arrived in Hornbrook, California at 6:30 p.m. The roads were good cement until I came to the California state line. From there on it has been gravel. The roads from here [to] Redding, California are gravel they say. The route all day was very pretty. The most part was in the valley of the mountains until I came to the Siskiyou Mountain Range which is in southern Oregon and northern California. The summit of the Siskiyou Mountains is 4,850 feet high and gives a fine view of the surrounding country for miles. I covered 248 miles and am camping out in the town’s camping grounds.

I left Hornbrook about 7:30 a.m. The road from there to Redding, California, 146 miles, was all gravel and very bad as they are rebuilding it. The rest of the way was on concrete and all good. The [last] 100 miles has been level and with very little shade and very hot. There were a few palm trees along the way. I covered 296 miles today and am camping out tonight.

I left Woodland at 7 a.m. and rode 65 miles to Vallejo, California, and caught the ferry boat Asbury Park direct into San Francisco. The Ferry went right on the Napa River through the straights to the San Francisco Bay. She went right by the immigration quarantine station, the military prison, Naval Training Station and near to the Golden Gate. It was very rough in the bay. On arriving in the city I got a room in a hotel (Y.M.C.A. full) and started out to see the city. I first went to [the] Presidio, the  government Post and hospital. It’s a pretty place built right on the San Francisco Bay and Golden Gate. It’s a small city in itself. I then went to the Golden Gate Park and went through their large museum and all over the park. It is about like Druid Hill Park in Baltimore. About 8:00 p.m. I took a car to Chinatown. It is about 7 blocks long, 2 blocks wide. It certainly is a place worth seeing. I walk[ed] all over it and then back to the hotel on Golden Gate Ave.

I got up at 9 a.m. and started out to see more of the town. I toured all through the business district and all over the suburbs and then went down into the Golden Gate Park to the Golden Gate again. From 4 p.m. until 8 p.m. I spent in the Gym of the Y.M.C.A. At 8:30 p.m. I went to the mat in the Y.M.C.A. tournament here in wrestling in the Y.M.C.A. Pacific Finals. I wrestled unmatched in the 158 pound class, I had to wrestle twice. The first bout of 12 minutes I won by a decision.  The second bout after an hour’s rest I won from the San Francisco Y.M.C.A.’s best 158 pound man in 1 minute 50 seconds by an arm and wrist lock. It was the quickest bout of the night. My man came out of his corner and went right for a hold. I caught his left arm and floored him, getting an arm and a wrist lock at the same time. The bout lasted 1 minute, 50 seconds. I won a small gold medal and ribbon. (Staying at the Y.M.C.A. tonight – Free) 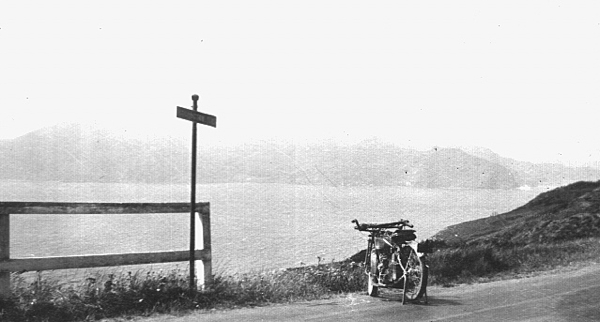 Phil’s Scout at the Golden Gate – before the bridge.

I left San Francisco early and took the ferry to Oakland and then headed for the Yosemite National Park. The roads were all asphalt or cement until I got within 75 miles of the the Park and then it was all hard dirt. At Oakdale, California the road started to go uphill. It went up until I got to the summit (7,100 feet) of the road to the park. It was hard going but I came up all right, sometimes in low. The road down into the Yosemite Valley is one way traffic and between 20 & 25% grades in some places and if you slip off it is is a 2,500-3,000 foot drop straight down. The road in most places is about 9 feet wide. I am camping on the Merced River in the Yosemite Valley. It is 4000 feet high in altitude and the walls are 3,000 feet high. I covered 190 miles today.