In which I find that the idiots that put together my kit sent me a nut that was shorter than my fingerboard. 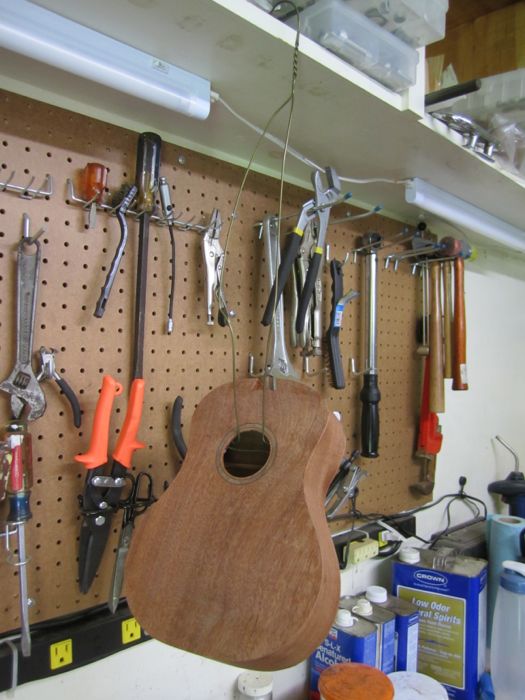 When we last left the uke – I’d just done the second coat of filler – I use a coat hanger to hag it up to dry – and then went over the body again with 320 grit sandpaper – and then onto the neck. 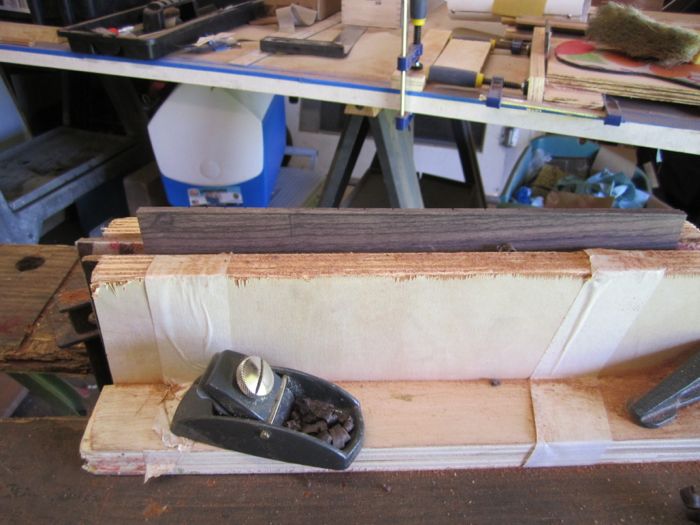 I marked the fingerboard to match the profile of the neck – and then trimmed it to fit. 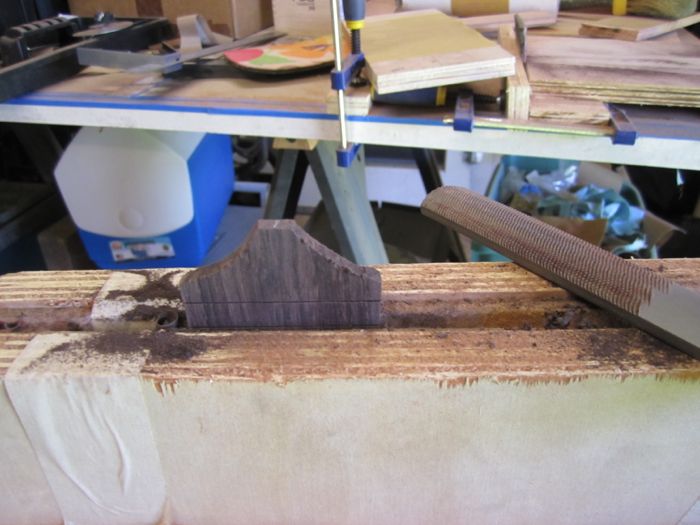 To make the detail on the end – I marked the center of the fingerboard – and then went after it with my rasp – eyeballing the profile.

When it was profiled – I trimmed the top – and then went to do the frets. You use the fret hammer to firmly tap them into the slot. 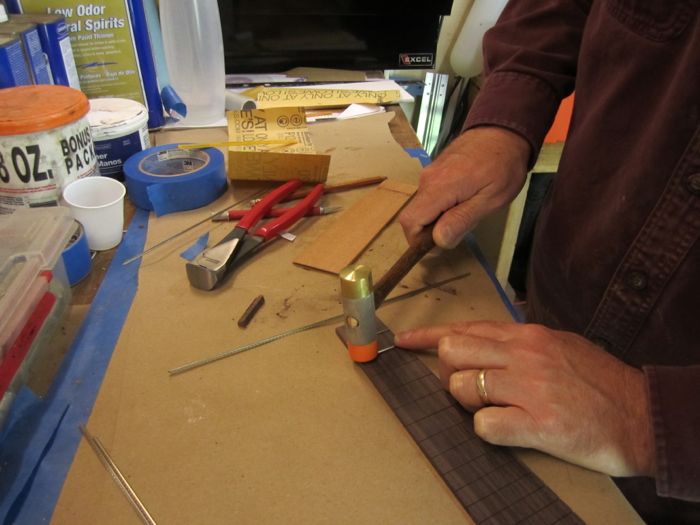 And then use nips to trim off the fret. Setting the frets was pretty simple. 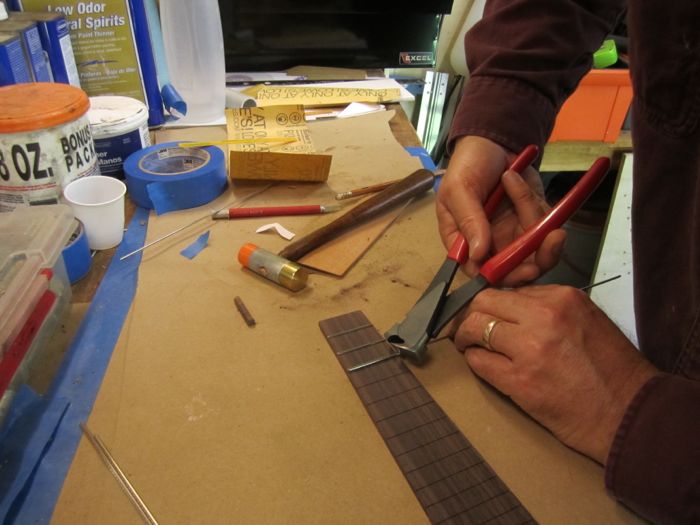 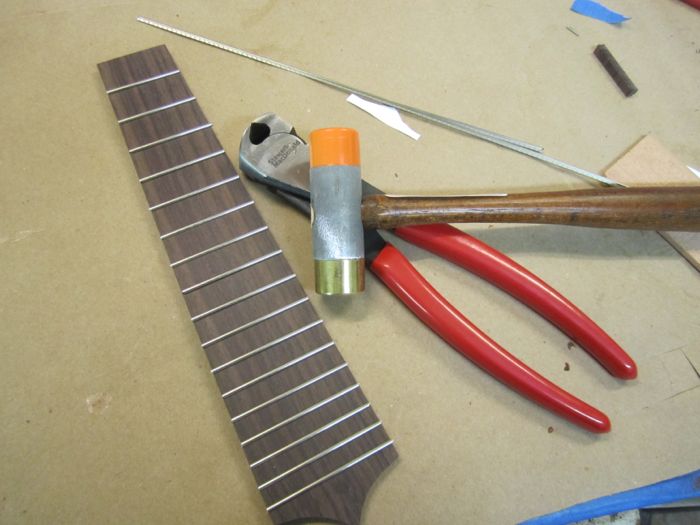 When I eyeball the fingerboard – it appears that the frets are not exactly square – which should make the intonation interesting – I’ll call it a Jazz ukulele. 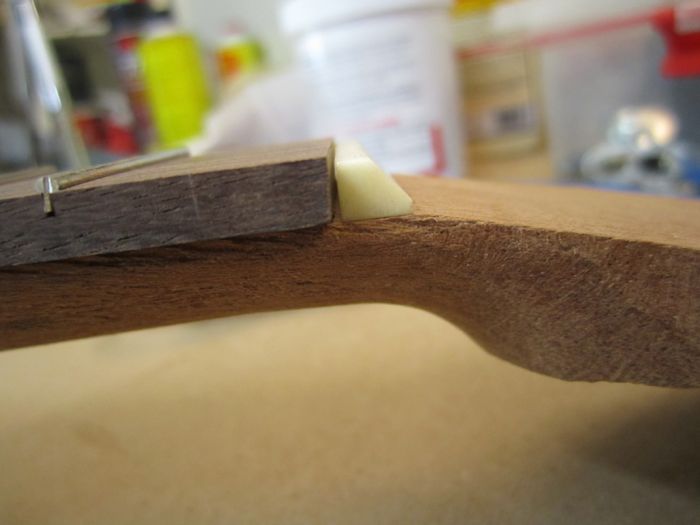 So, I get ready to glue up the fingerboard to the neck – and I pull out the nut that came with the kit – and it’s shorter than the fingerboard. This will make the action pretty tight. I glued in a scrap of wood for position – and ordered a blank classical guitar nut from Stewart MacDonald – so I’ll need to build a new nut down the road. 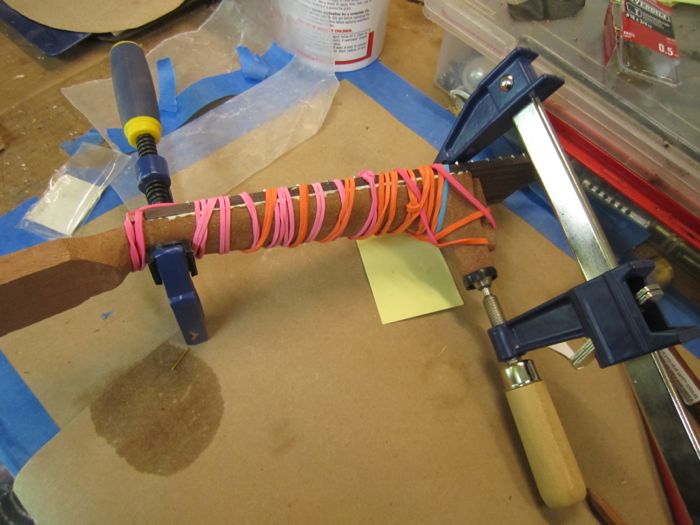 But I got the neck and fingerboard glued up. 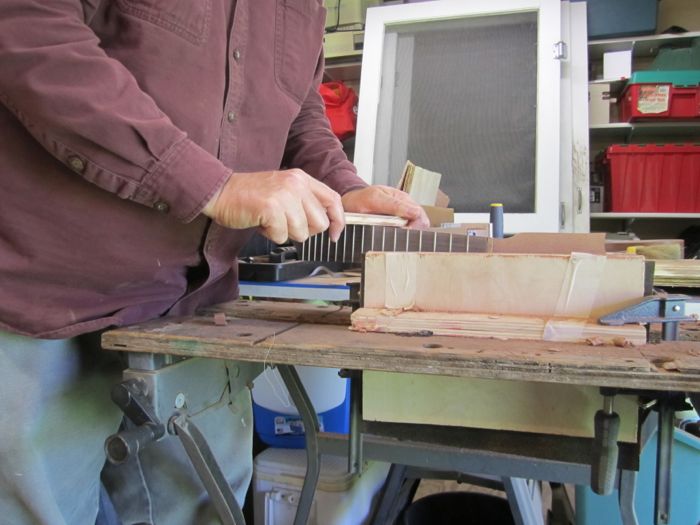 And then sanded it down. 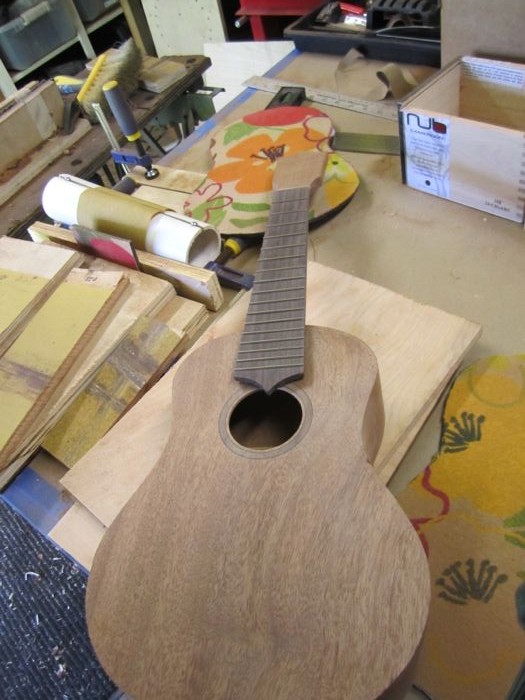 When I stuck the neck on the body it kind of looked like a uke. 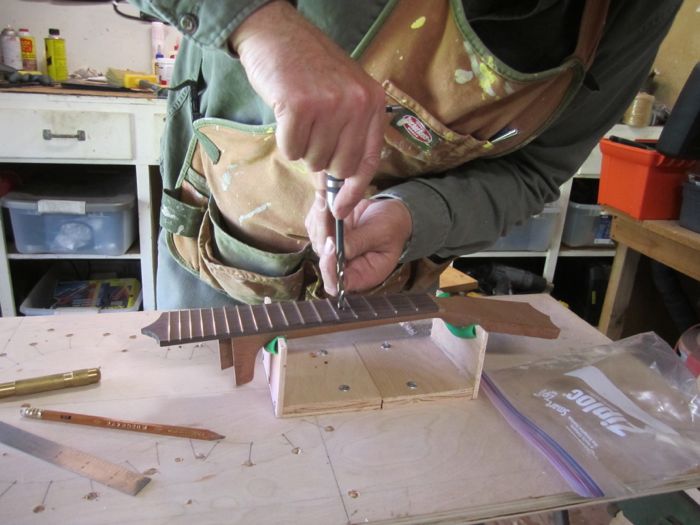 Drilling holes for the spots

The next thing I did was drilled hole for the fret markers that are on the 5th, 7th and 12th frets. This is when I should have been using the most important tool – 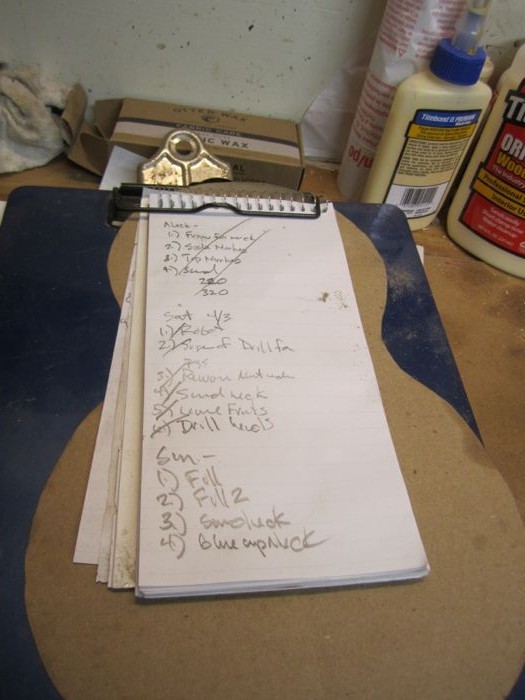 The checklist. If I had – then I would have put in the markers before the frets so I could easily sand down the fingerboard. But I didn’t 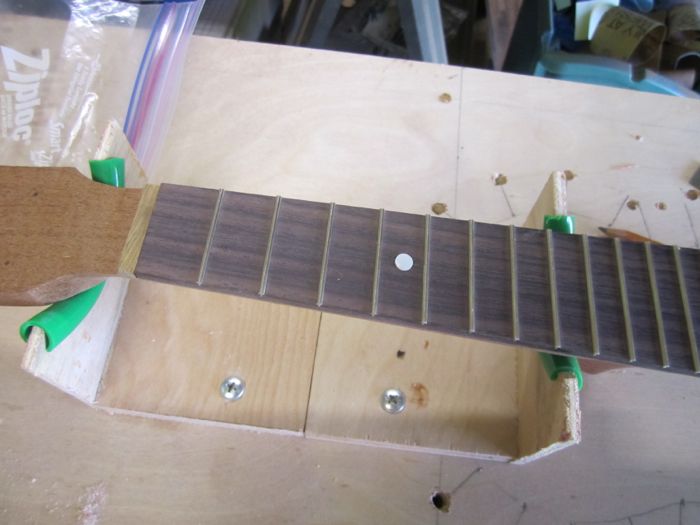 So I have to sand between the frets – and the grain is running long ways – so lots of little short strokes. A lot more work. I also only had a regular drill bit (1/4″) to cut the holes – and it did a messy job – so there was tear out at the top – they look kind of messy – I’ll have to figure out some way to fill around them at some point. 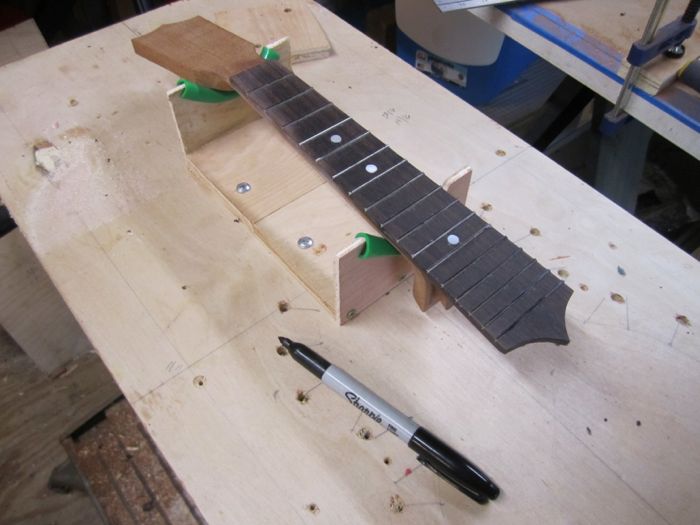 The next step  – using my to do list – was to level the frets. You color each fret with a marker – then 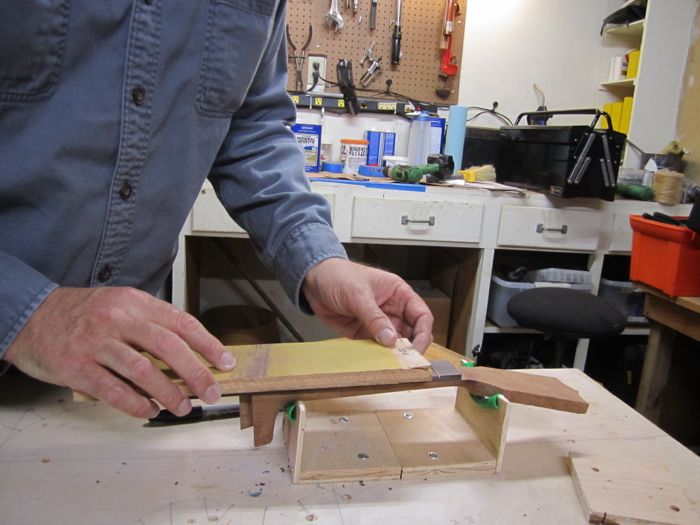 Then sand with 320 sandpaper (probably should have used 400). 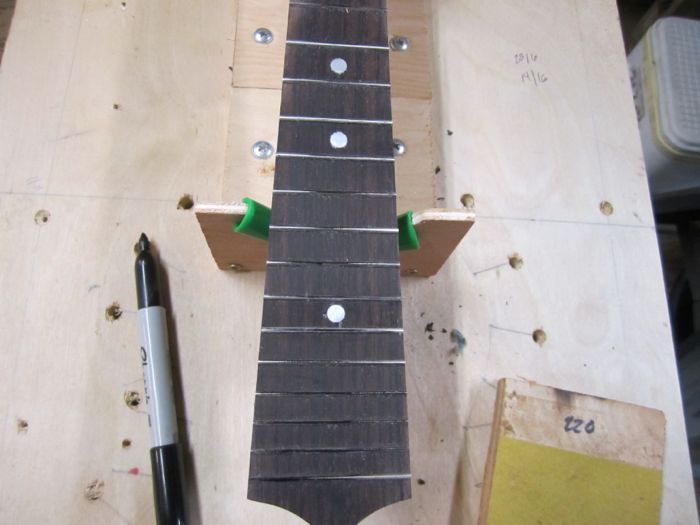 Then you look for the spots that are still colored – those are the low spots – you sand until everything is shiny – then (theoretically) all the frets are the same level. 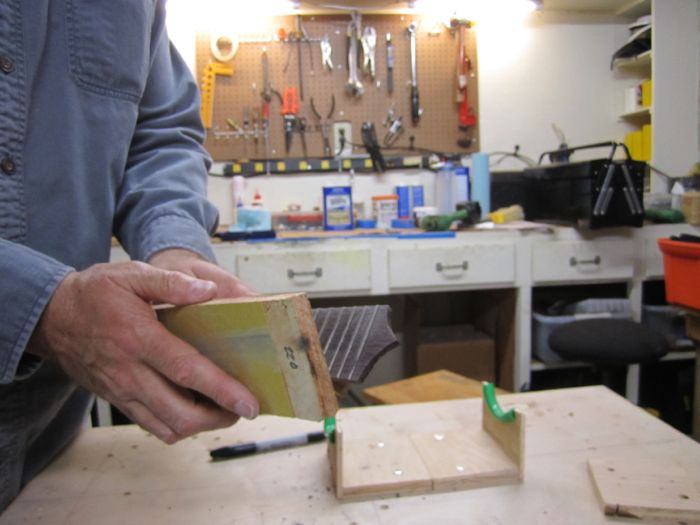 Then I used the block to relieve the edges of the frets – at about a 45 degree angle – mas o menos. 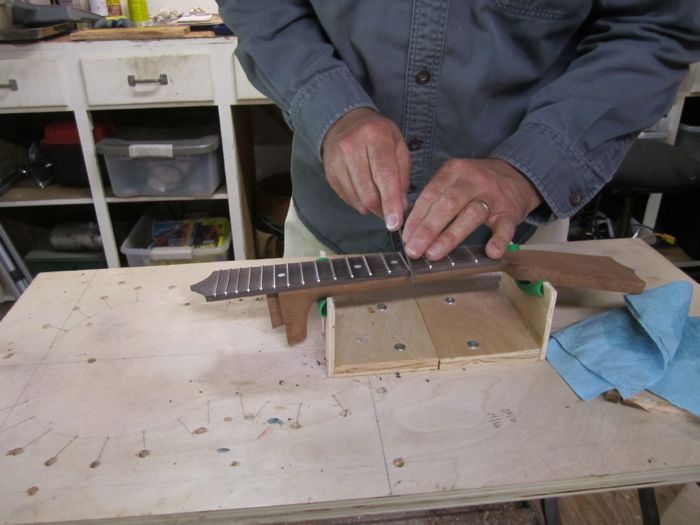 Then used a fret file to round the sharp edges – this file only has teeth on the sides – the edges are rounded so they won’t cut the fingerboard. This went pretty quick – a few passes on each side of each fret was all it took to make them smooth. 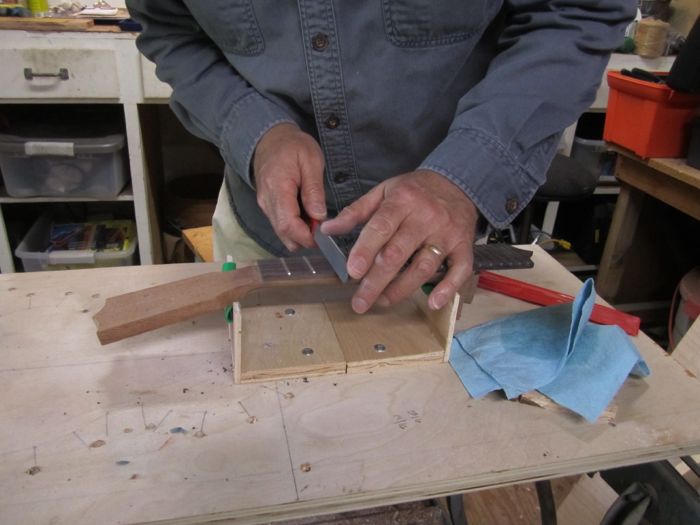 This is a fret profiling file – the edges are the cutters – and they’re dished – so you can round off the tops of frets that have been squared off by being leveled. This just took a couple of passes as well. 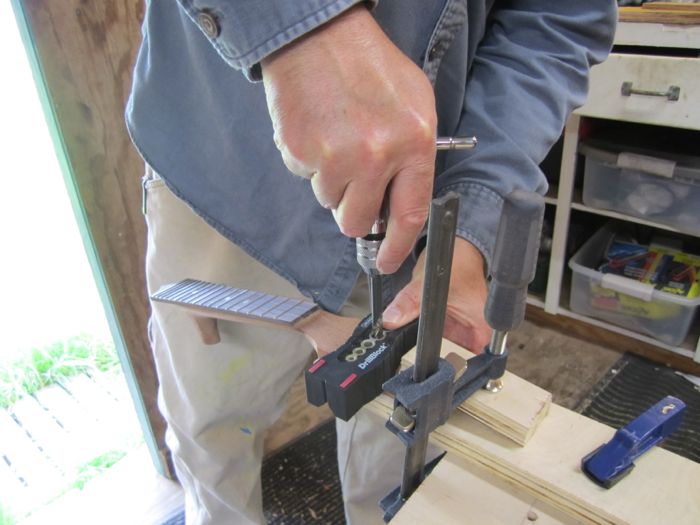 Then I drilled the holes for the pegs. I used one of my tap handles and drilled them by hand – working on the theory that I would screw it up more slowly – which seemed to work. 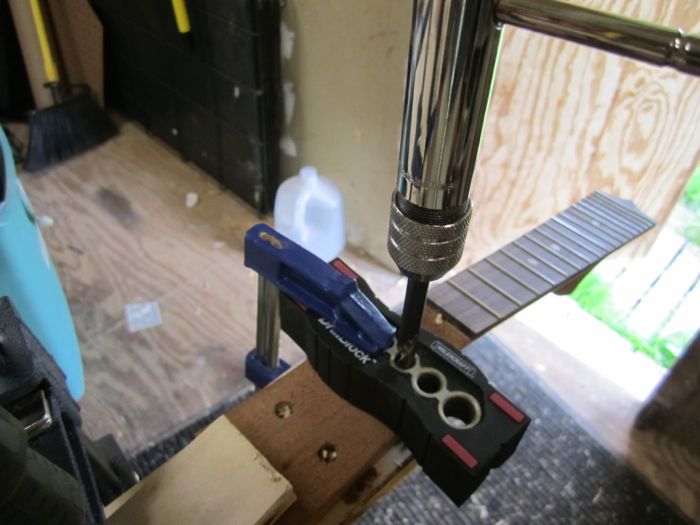 I did get an $8.00 drill guide – because I had no confidence that I could drill a straight hole. 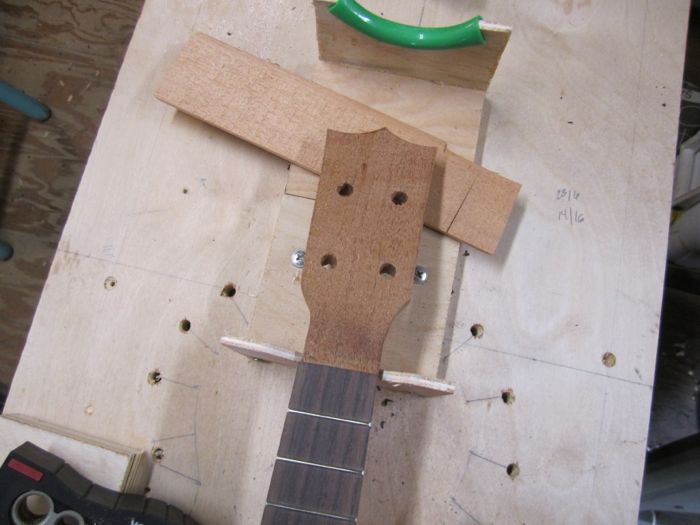 But I got them all drilled – 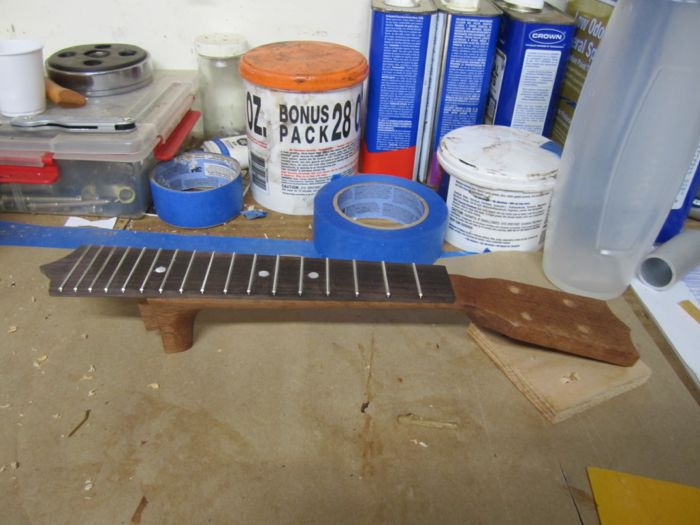 Then I sanded down the neck with 220 and 320, and put on the first coat of clear sealer.