So, I took up the Ukulele about year ago – and have been enjoying the heck out of it. Check out the Austin Ukulele Society for some fun Ukulele action. And I’ve decide I want to build my own Uke – don’t ask me why – so I bought a kit 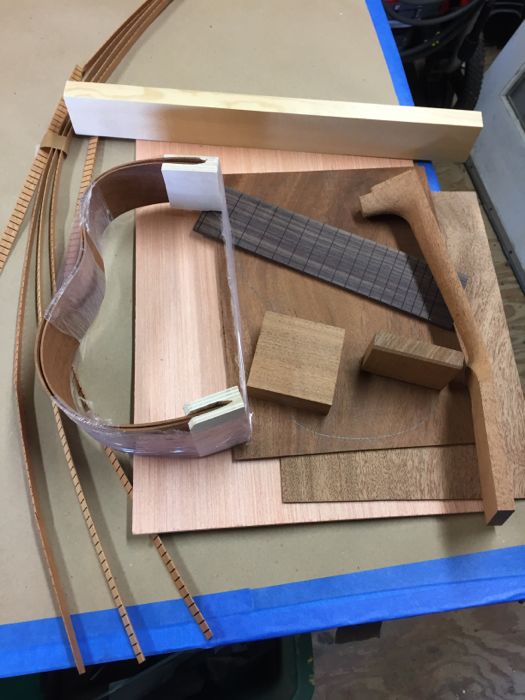 A Box of Wood

The kit – From Waldron Music – is pretty much a box of wood – the sides are bent, the neck is machined (but not trimmed to a finished size), and the fret slots are cut – but the fretboard is untrimmed. They sent a How-To guide – which is a How-Not-To  – since none of the parts match anything in the how to – and a useless schematic drawing that I can’t get to print since it was done in color – but that doesn’t really matter since the drawing is so small I can’t read the text anyway. Probably a great kit for someone who’s build an instrument or two – but not for a neophyte like myself. But I’m a glutton for punishment – so onwards through the fog.

The first thing I did was build a jig (based on instructions from Stewart Macdonald – who actually does sell kits for beginners). 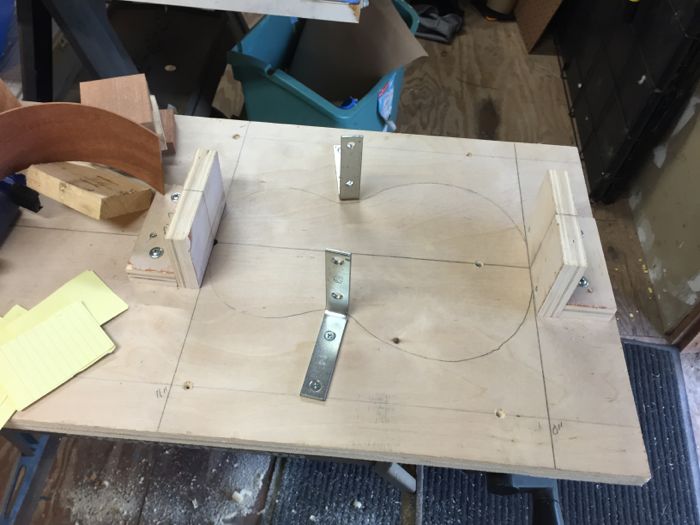 There’s a block at the top and bottom, angle brackets to hold in the sides. I made a template of the body on a piece of brown paper – using measurements from the internet for a concert Uke – and traced it onto the jig. I ran the centerline up over the end blocks. 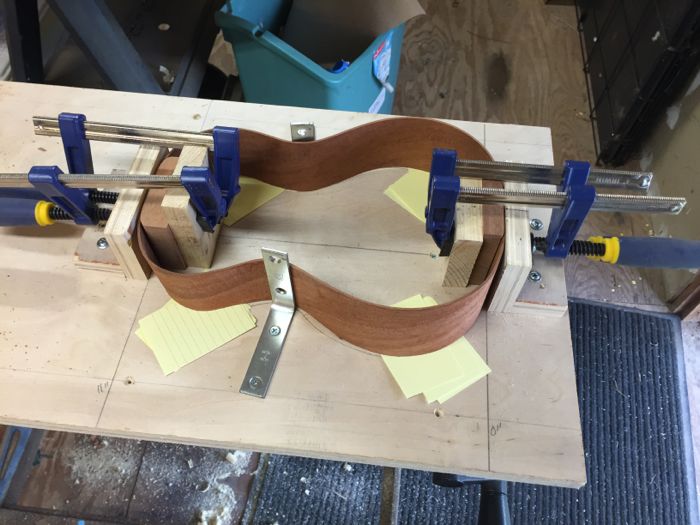 Sides in the jig

The I put the sides in one at a time, and pushed them out to match (mas o menos) the pattern, clamped them in place, and marked the centerline. I used that line to trim the sides. Then clamped them into the jig with the tail and neck blocks – as above. Once it looked reasonable – I glued everything together, and clamped it up to set. 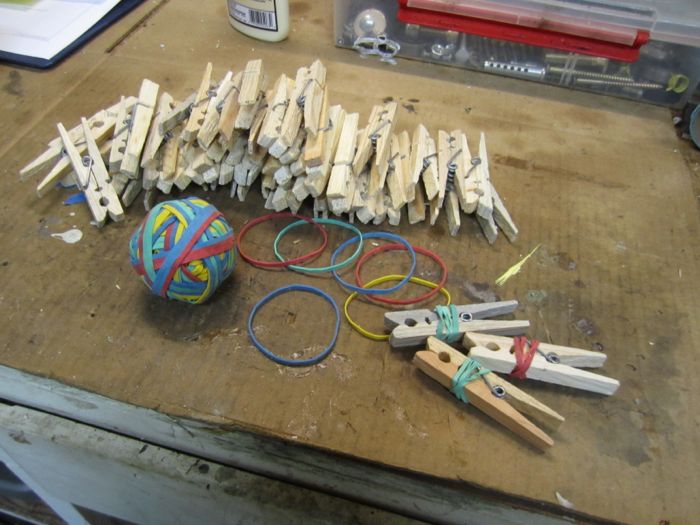 The next step (for me, at least) was gluing the lining in on the top and bottom of the body. The lining is a thin piece of wood that gives a gluing surface for when you glue down the top and bottom. My lining is kerfed – so it has a bunch of small cuts so that it will bend – and break – easily. When you glue it in, you need a bunch of small clamp – clothespins are good – but I’m adding a rubber band for more oomph. 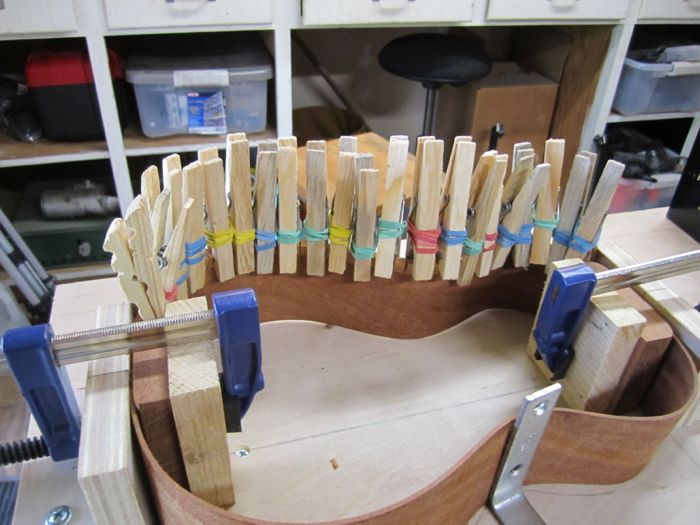 One side dry fit

Before I glue anything I dry fit it – to make sure everything is good. Here’s one side of the back with the lining dry fit in place. 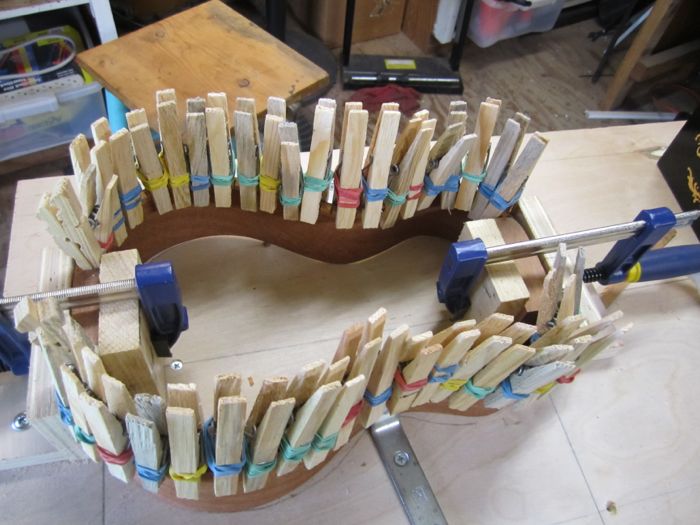 Then I smear glue on the pieces – wipe it on my pants, my shirt, my beard – anywhere I can touch, put the lining in place, try to keep it steady, and put on all my clothespin clamps.  I’ve got the body in the jig to keep everything kind of straight. 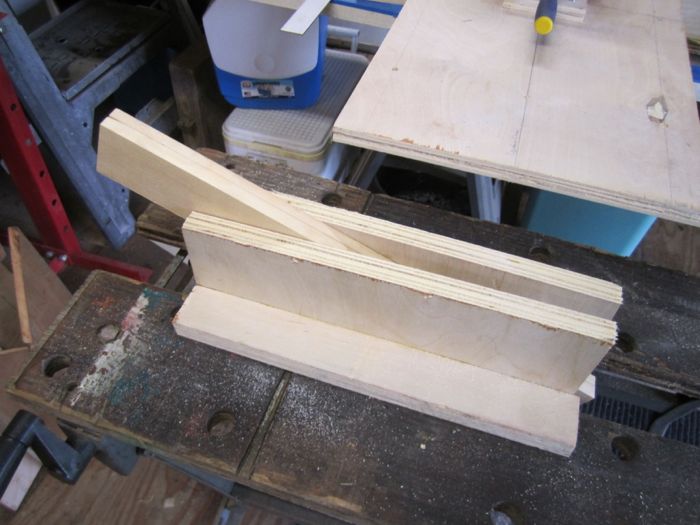 So, they included spruce for the braces which attach to the top and bottom – but it’s like a 1×3  piece of stock, and the braces are supposed to be ~1/4″ thick. The Waldron guys told me to just cut the spruce on my bandsaw. Uh Huh.  So, while the linings dry on the body – I re-sawed the spruce stock kind of in half. First thing I did was build these jaws for my ancient-ragged Workmate (which is also where I mount the jig). I marked the “kind of ” middle all the way around the board, and clamped it up. A great tip from Dan Julien was to use a chisel to make a starting slot – that worked great. 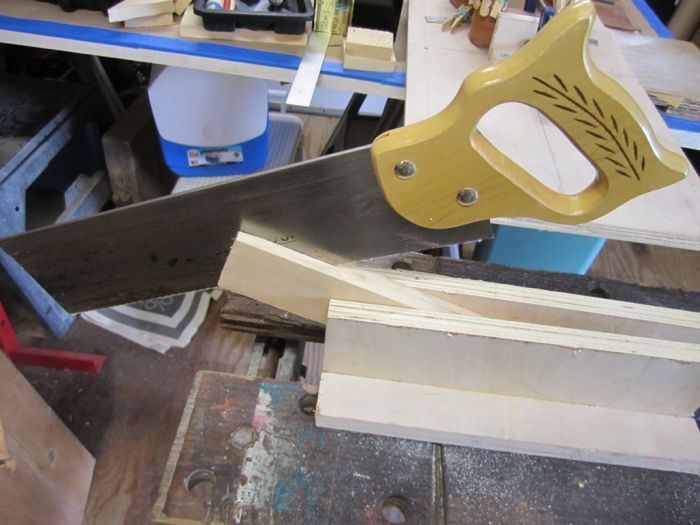 Then I used my rusty backsaw to cut down from each of the corners – and get a semi-straight cut going on each side. 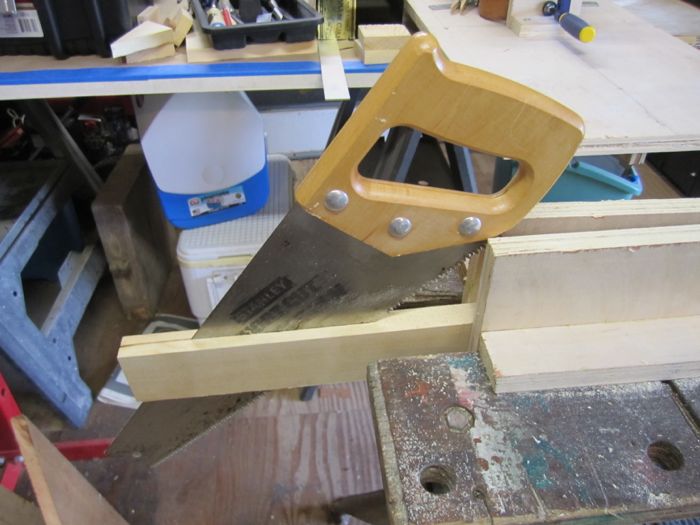 Then I got my even rustier workbox saw. I’d cut a ways, then flip it over, cut, flip. Over and over. 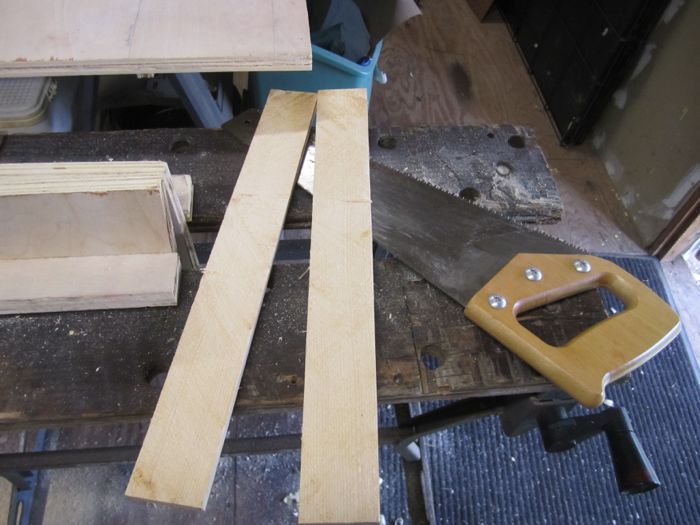 Maybe it too twenty minutes with all the fooling around – but came out pretty good. So now I have 2 ~3/8 or so thick boards to use to cut out the braces.  I didn’t spent any time cleaning up the sawn faces – since all the braces will be planed down anyway. 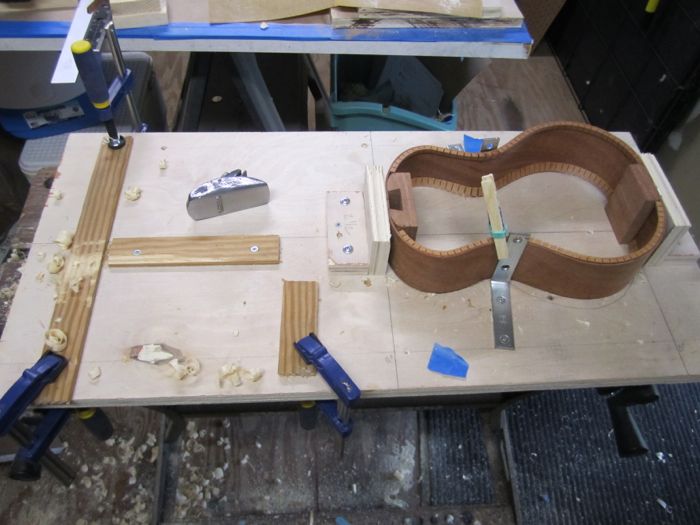 I used a couple of scraps of 1/4 lath I had laying around, and set up a little place to plane down the braces. I sawed the pieces out of my re-sawed spruce, cut them to length – then planed them sort-of square here. 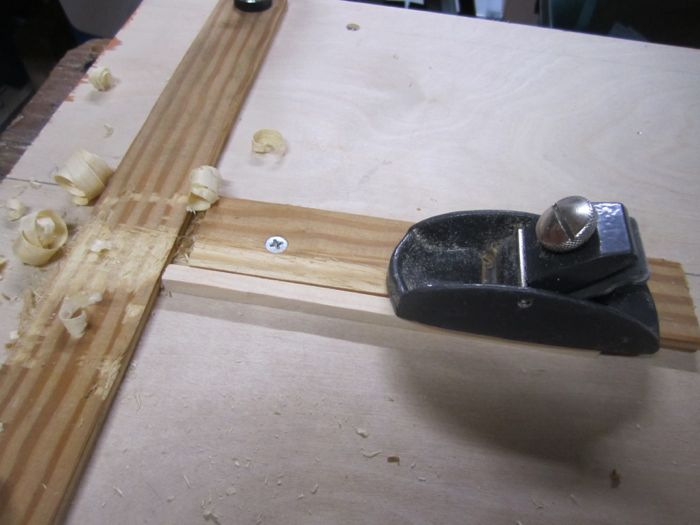 Planing down a brace

I know it doesn’t look like in the picture – but the screw head is well countersunk (so far)  – so I shouldn’t bugger up my little plane blade. 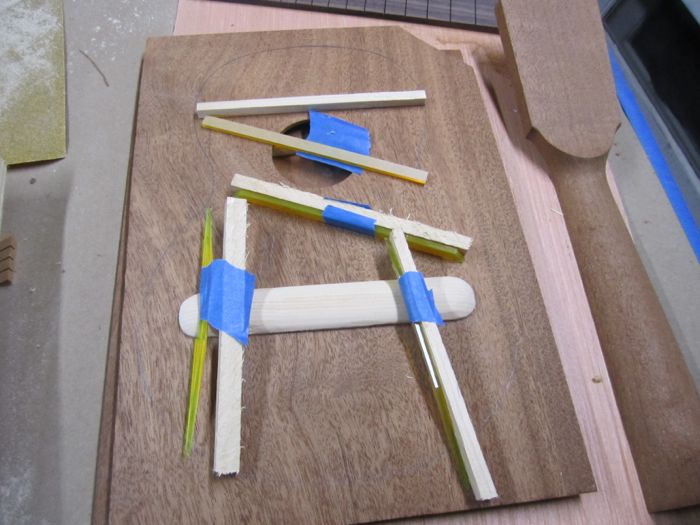 Here’s the braces for the top. Still more to do – but going to have to wait for another day.