Well,  our fourth Ural National Rally Day is coming up September 6, and in my role as Rally Master I need to make sure the rally scorecard works – so I did a practice rally to try out the new format.

The rally is kind of a scavenger hunt – you get points for finding stuff like Roadside attractions, riding on dirt roads, eating pie, etc. 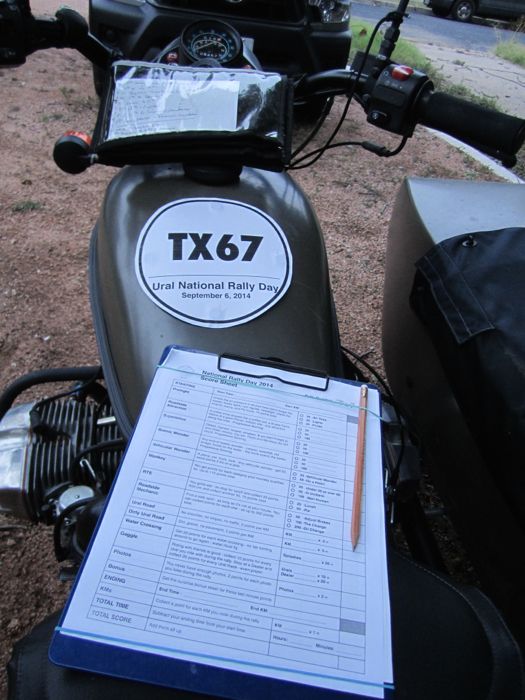 To keep track of my points I had my official score sheet – where I can check off my points as I collect them. My clipboard, with a couple of rubber bands to keep the pages from flying off – and to keep my pencil handy. Underneath the score sheet is a rally log – where I track my miles for riding dirt roads, etc. On the gas tank is my Rally flag – to which I glued some little magnets so I could hang it on the bike for documenting stops – that worked pretty well. In the map case on the bars are my 4×6 cards with turn-by-turn directions to stuff that I need directions to find.

For this ride, I made a loop through Austin to pick up a few points by stopping by some points of interest. Then I shot out to Lexington  – meeting David and Laura on his Ducati along the way. We ate at Snows, then looped out to Deanville and Dime Box, then pie at Elm Creek Cafe. David and Laura shot for home then, and I took a roundabout way home to pick up a few more points on small local roads. The whole loop was about 261km. 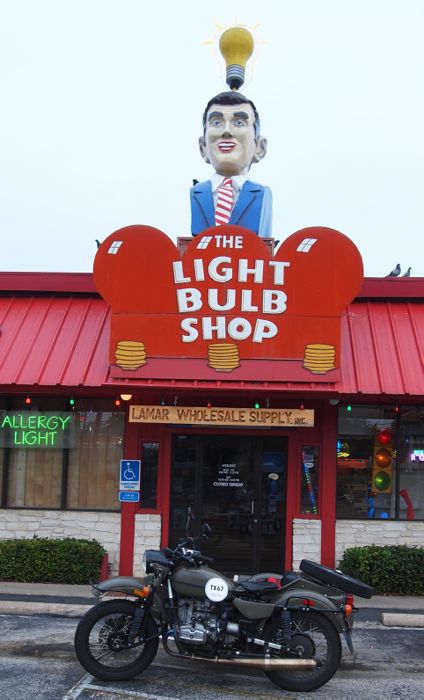 The Idea Man at the Lightbulb Shop

That was 25 quick points, and then down the road. 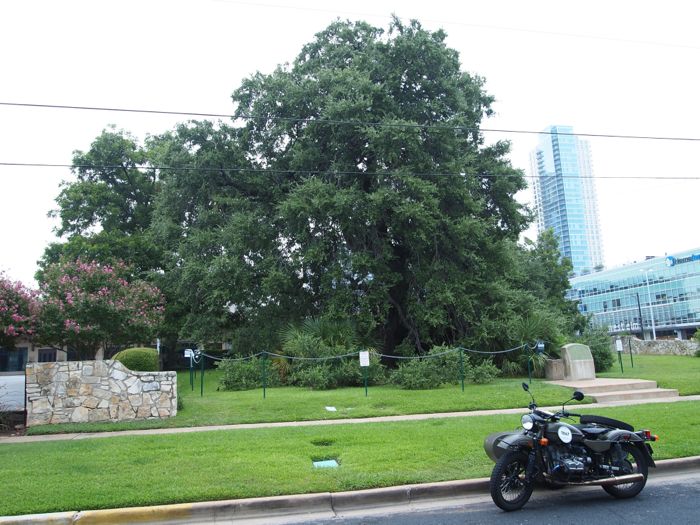 To the Treaty Oak. This is the last of 14 oaks that were called the Council Oaks. Folklore has it that Stephen F. Austin negotiated a treaty with the local Indians here – or that these trees were the boundary between The Austin Colony and Indian lands – or that the local Indians sat here and smoked and had councils. In any case the tree is 500 years old. Some idiot poisoned it a few years ago – the limbs used to stretch out over 120 feet – but it’s hanging in there. 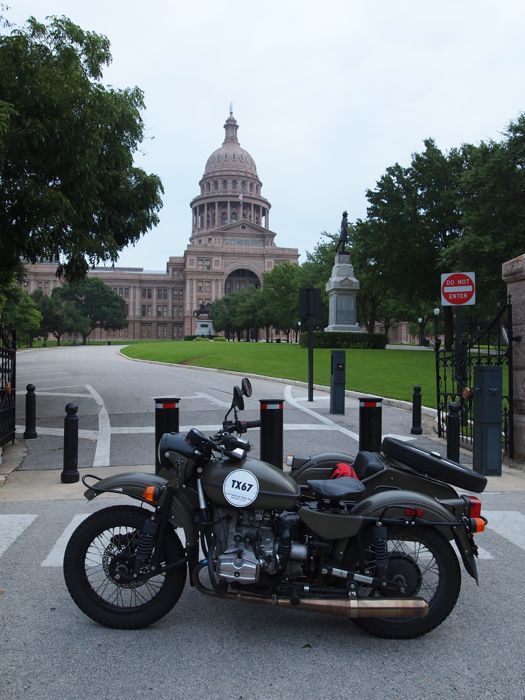 I was going to collect points here for the tallest capitol – since the Texas Capitol is 11 feet higher than the US Capitol – but there are six other state capitols which are higher – so I collected points for the tallest pink granite capitol. 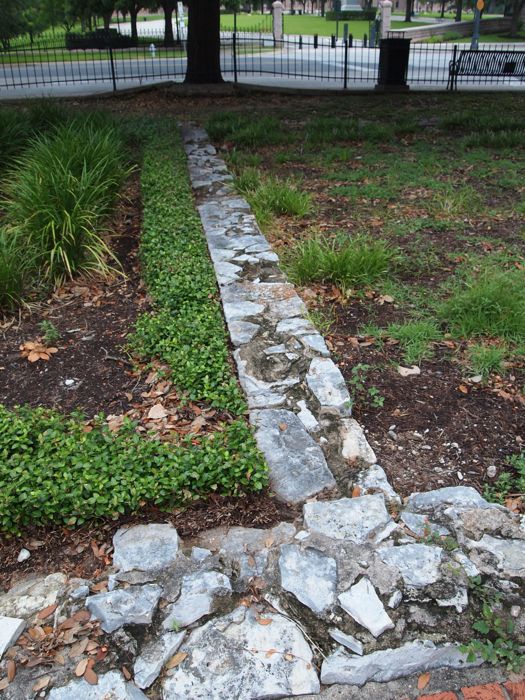 These are the foundations of the original state capitol – which burned in 1881 – if I’d been on the ball I would have collected points for the shortest state capitol. 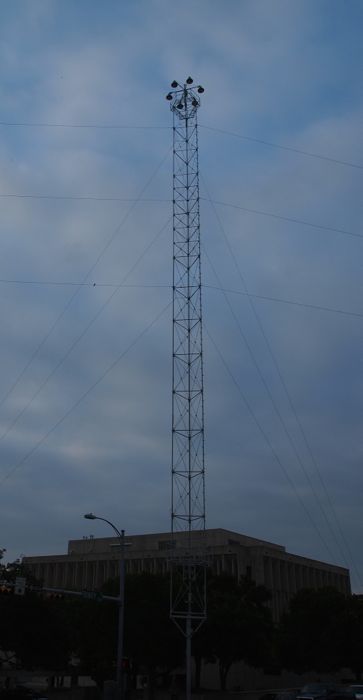 Here’s points for the only Moontowers still being used in the US. These were erected in 1894 – they’re 164 feet high – and the six lights up top provide illumination equivalent to the light of a full moon. There were originally 31 moontowers around downtown Austin, 17 of them survive – but only 6 are on their original locations. They still light up the city at night. 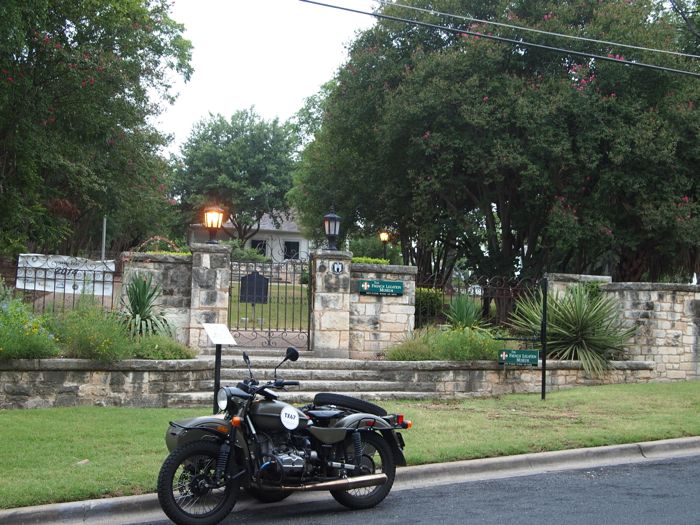 This is a terrible picture  – but here’s the French Legation to the Republic of Texas – the oldest continually occupied building in Austin.  From here – I jetted out to Manor to meet David and Laura – and we shot up to Lexington to: 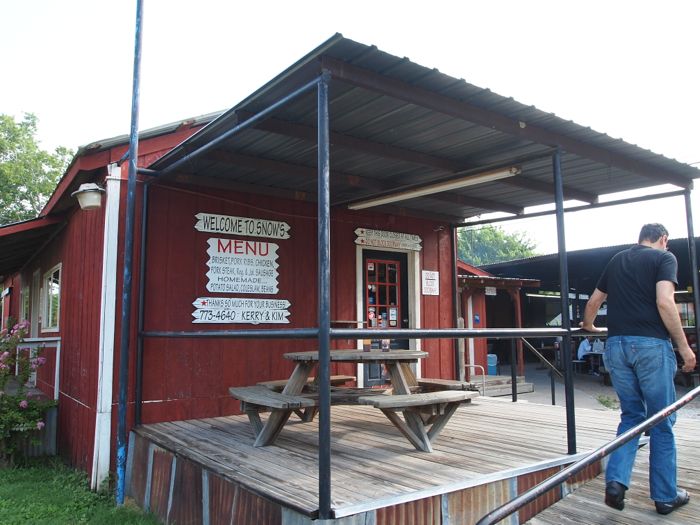 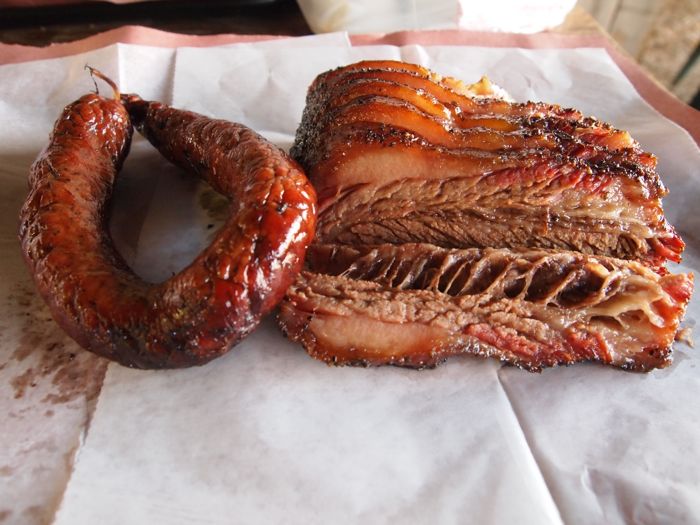 It’s almost criminal to get points for eating barbeque this good – but I’ll take them anyway. 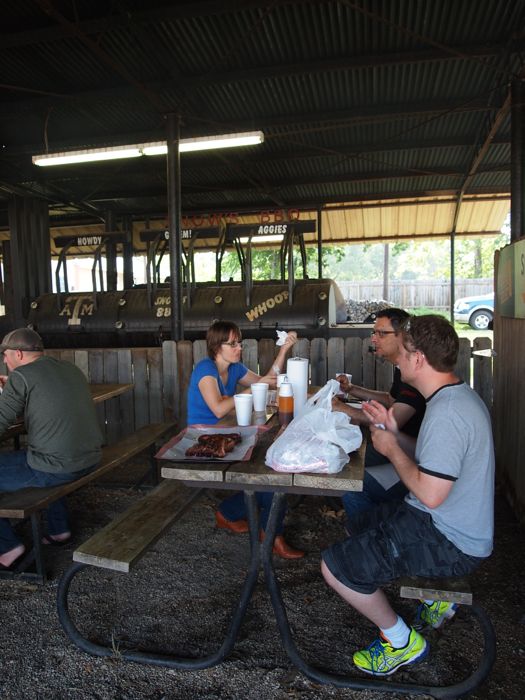 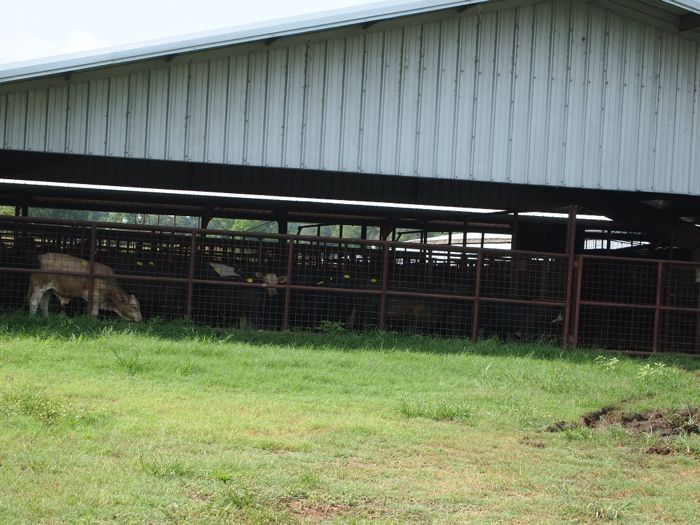 And to make it even better there was a cattle sale in the sale barn at the end of the street – so we were serenaded by the pre-bbq being run through the chute.

From Snows we headed east to Deanville  – to the Sons of Herman Lodge. I’d tried a couple of times to hit them when they were cooking – and finally made it. 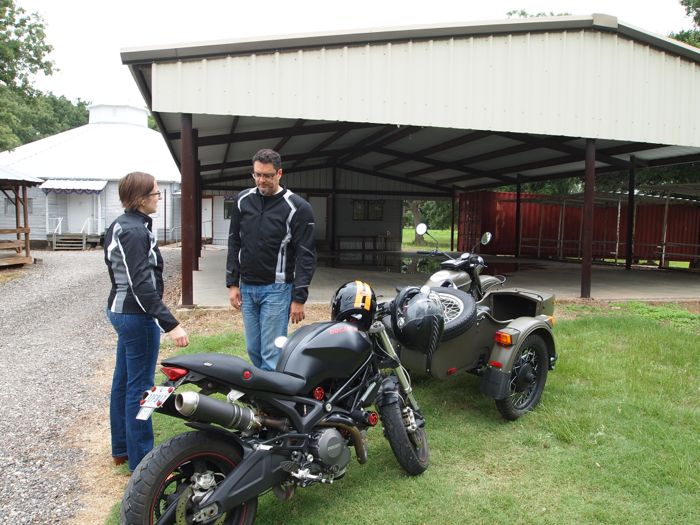 By request I didn’t take any pictures of the pits or the bbq – and I’m not at liberty to  say the pork steak was damn good – but we did actually make it there. 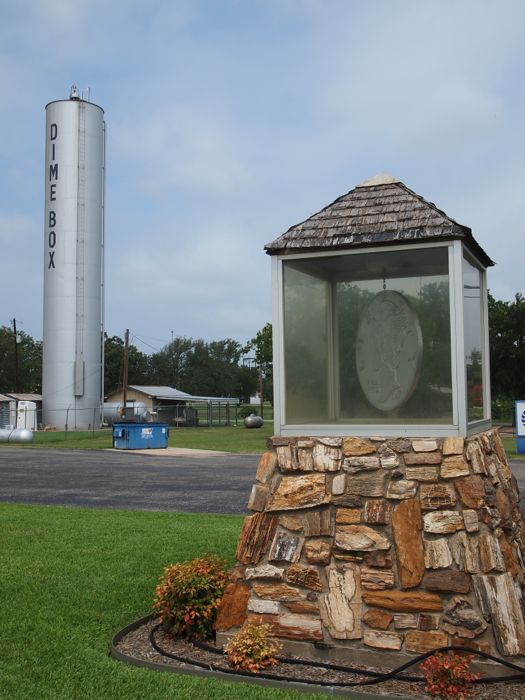 Dime in a Box in Dime Box

The Dime in a Box. In 1939 The March of Dimes kicked off their campaign in Dime Box – and this big Dime was part of that hoohah.

And then the most important stop of the day 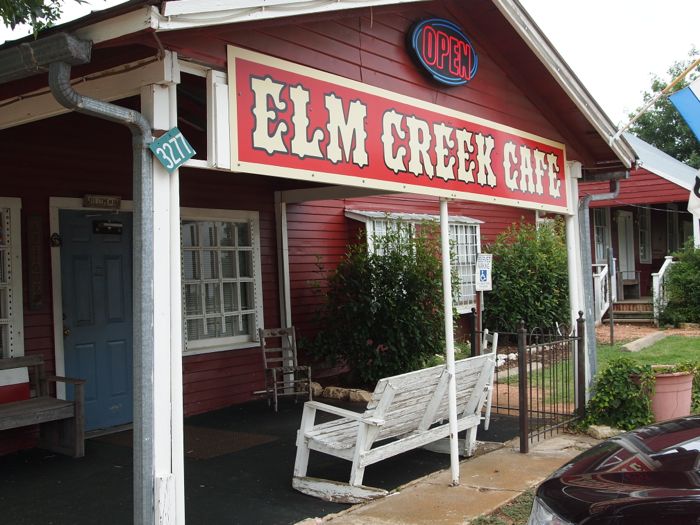 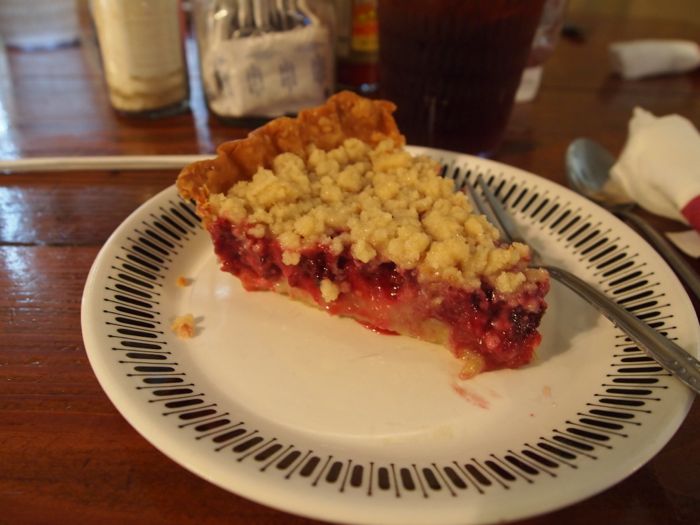 Elm Creek Cafe has the best pie around. This was a buttermilk pie with dewberries and a crumb topping – my goodness – no doubt a 50 point slice of heaven.

After leaving Elm Creek I did about an hour of Odometer Bingo. I started riding, then when I came to a cross road, I’d look at my odometer – if the last number was even – I’d go right, if it was odd, I’d go left – if it was 0 I went straight. After three turns I was completely lost. 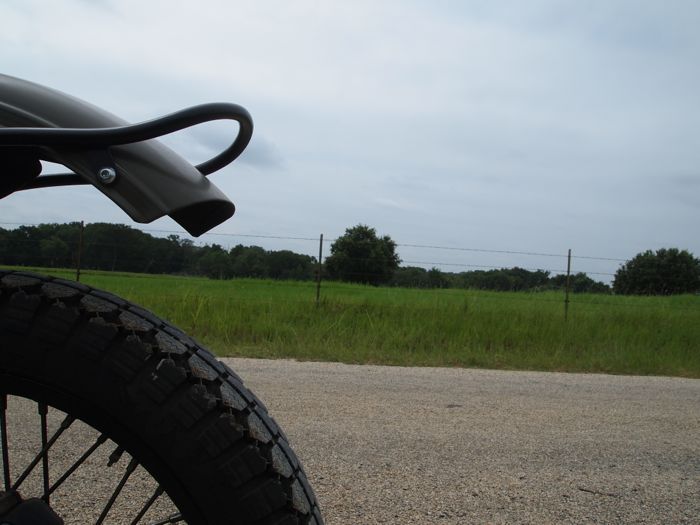 But it was a beautiful day – and everything was green from recent rains. 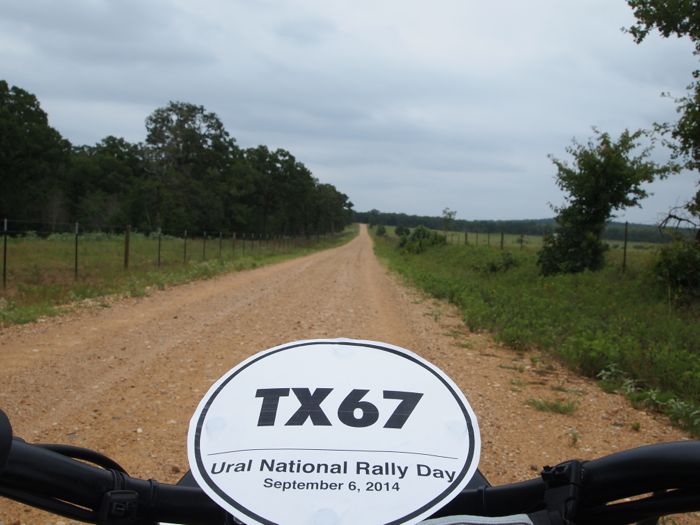 Ran down some nice dirt roads as well. I resisted the urge to look at the map to see where I was. I finally came out on a 4 lane paved road – no road sign – so I did what the odo said and went left – in a couple of miles I saw I was on 21 – and Old Texas 20 was just up ahead – so I bailed on my ODO-Bingo – and whipped off onto my favorite road of all. 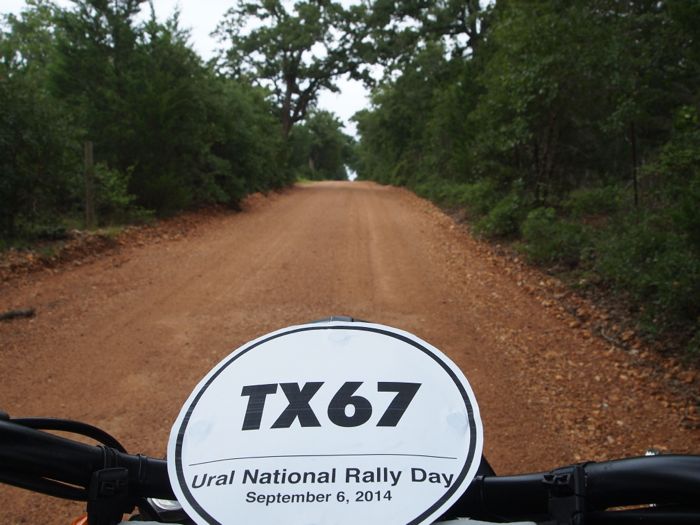 Old Texas 20 was the “highway” from Houston to Austin from 1917 to 1939. This section runs from Paige to Manor – and is along the original right of way with all the original bridges.  Today it’s a great little 1 1/2 lane road. I rode this back to Manor – than hopped on its replacement – US 290 – and headed to the house. 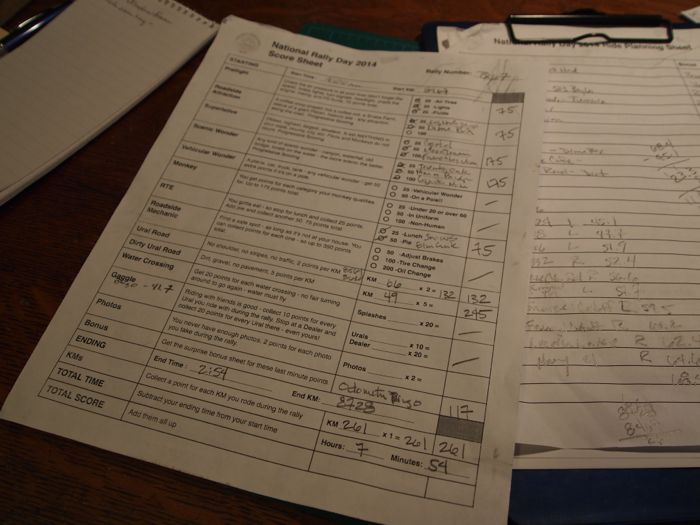 This entry was posted in Ride to Eat, Uncategorized. Bookmark the permalink.