I headed down to the Devil’s River this past weekend to visit my buddy Steve Black at his archaeological field school at Deadman’s Creek.

I left right as the sun was coming up in order to beat the heat. 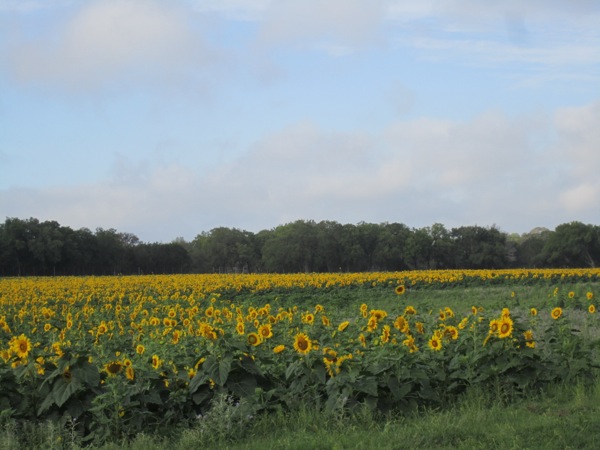 Caught these sunflowers along 290 as they were waking up and facing East. 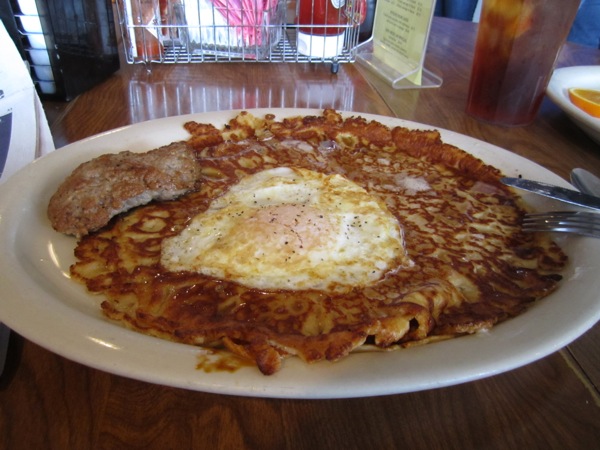 Just so I could stop at the Old German Bakery for German pancakes, house-made sausage, and an egg. Damn good eating. 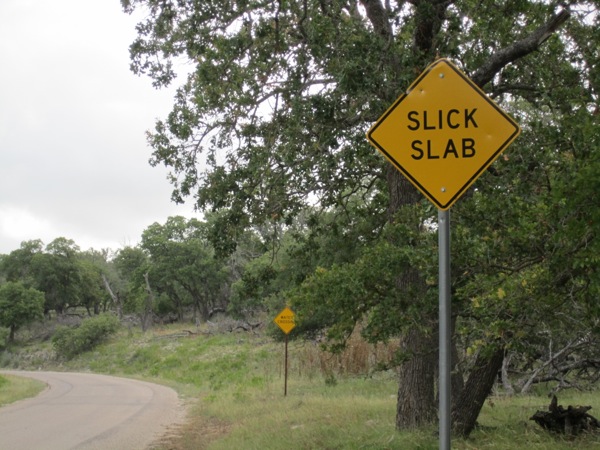 After breakfast I planned to run up Loudon Road and make a little loop into Harper before continuing Southwest towards the Rio Grande. But, as I stopped to check my map I noticed the alternator light was on. A check with the meter – sure enough – not charging. So I disconnected the headlight, and calculated I had enough juice in the battery to make it back to Austin. 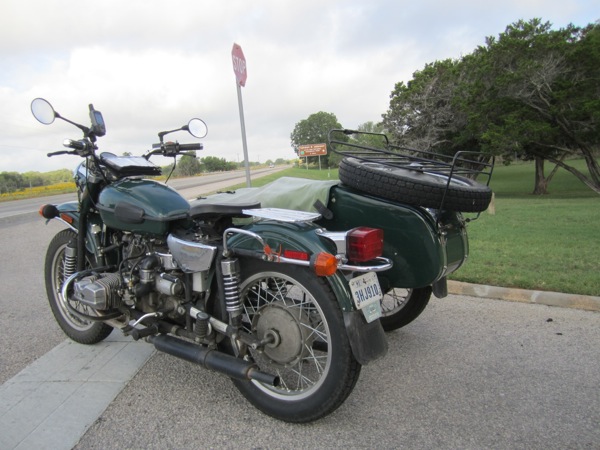 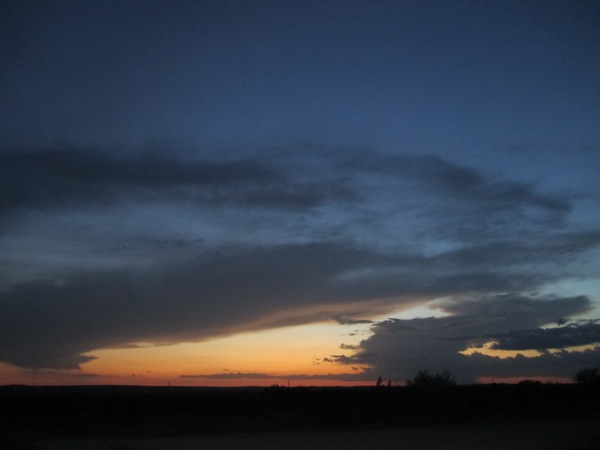 Pulling into the ranch

I pulled into the ranch just as the sun was setting. 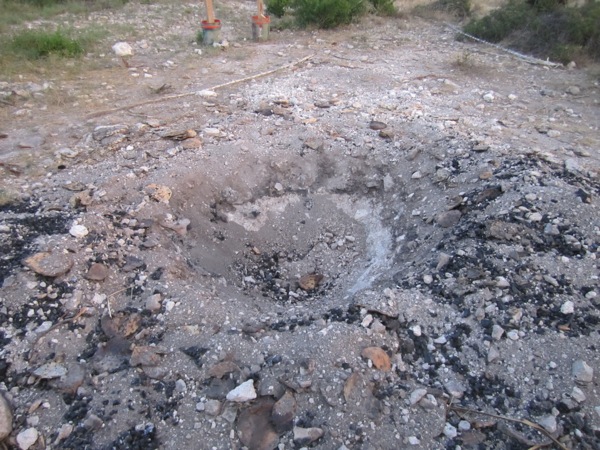 The sites they’re working on out here are known as Burned Rock Middens (BRM). Basically they are the remnants of ovens that the Indians created in the soil to cook plants like sotol and lechuguilla. Over dozens, even hundreds or thousands of uses, the areas accumulate large piles of burned rocks which are visible on the landscape today. The students have built this earth oven and are using it to cook sotol so they can collect data on the process and record what’s left after use.

This is lechugilla – for both this and sotol you collect the crown at the top of the roots where the leaves come out. They contain complex carbs which get converted to simple sugars once cooked. After it’s cooked the crowns are very soft and sticky – Indians would sometimes dry it out like fruit leather. It’s really pretty tasty. 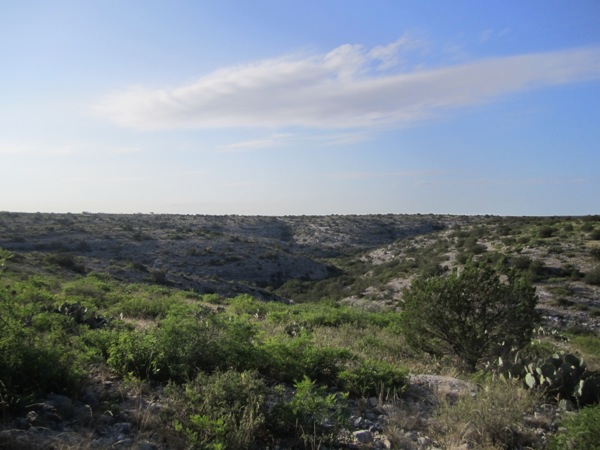 This part of Texas is right at the margin of the Chihuahan Desert – gorgeous, quiet and friggin hot. 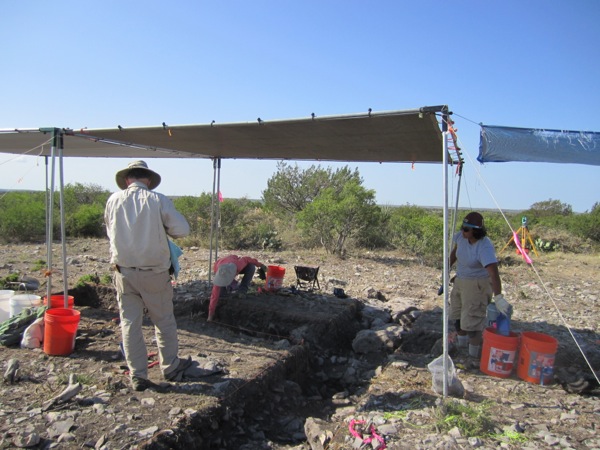 This is the Rancid Cactus site. There is a Burned Rock Midden (BRM) where the two trenches are – and the center of it is right about where they cross. The students are excavating the trenches and also collecting data on the burned rock in several columns. 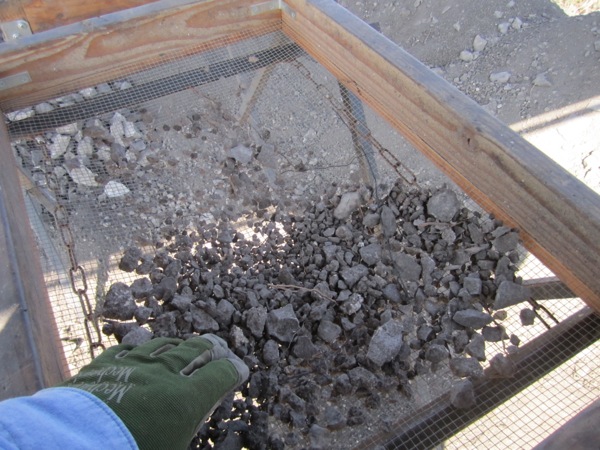 They made me screen since I wasn’t much good for anything else. At least the soil screened easily. 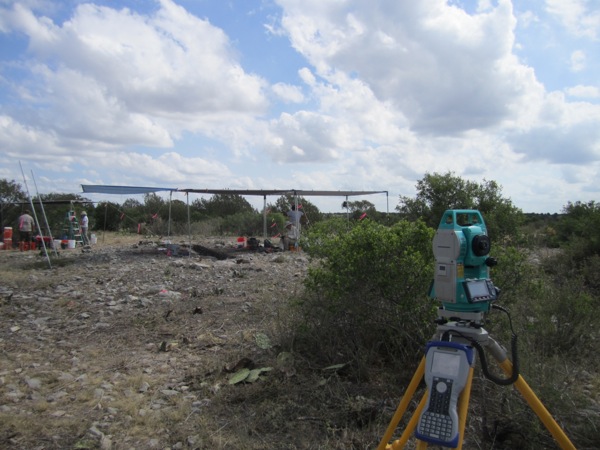 This instrument is a Total Data Station – they’re used to collect accurate position (X, Y and Z) on artifacts, unit corners, etc. Twenty years ago Steve and and I (and a lot of others) excavated a site without screening any matrix, and used a TDS to shoot in the location of everything found in the excavation area – people thought we were nuts. 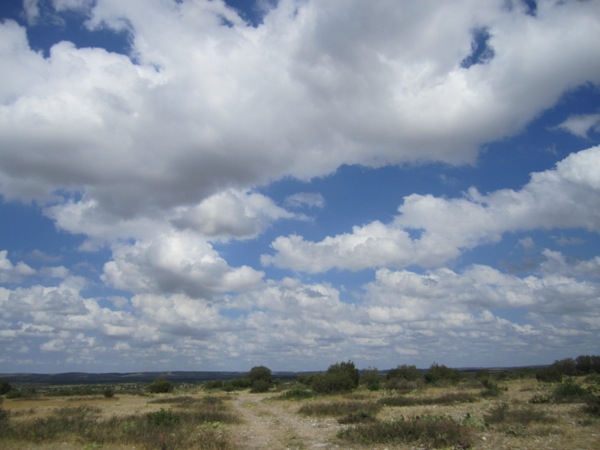 The road from Rancid Cactus

As far as roads go, this is a true winner. Really made me wish my scooter wasn’t sitting in Austin with no alternator. 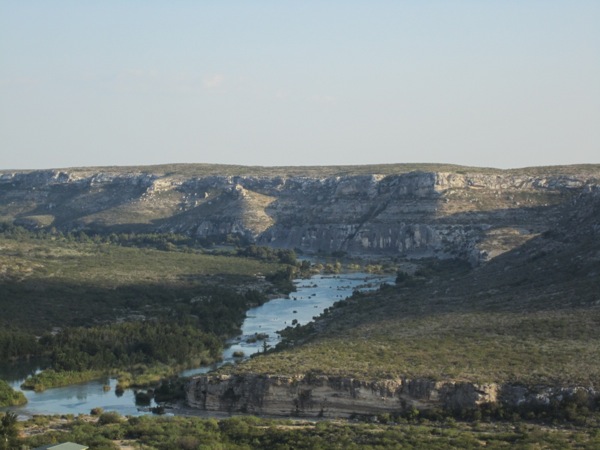 Just East of where we were staying is the Canyon of the Devil’s River. The crew goes down here every afternoon to cool off in the gin clear water. 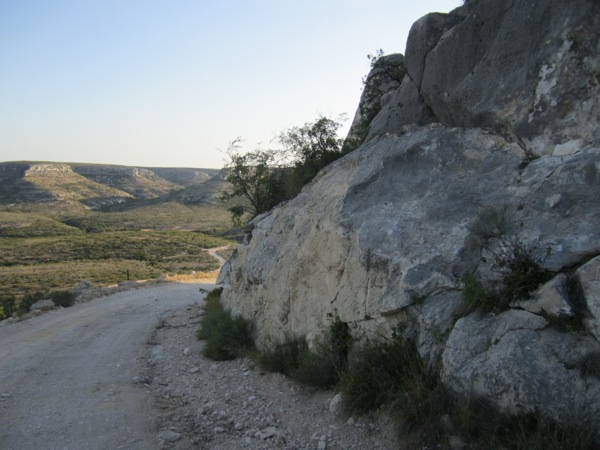 Road to the river

Now this road, down the canyon to the river, made me glad I didn’t have my scooter there. I would have had to ride it – and it would have scared me spitless. These are all private ranch roads – not public roads. 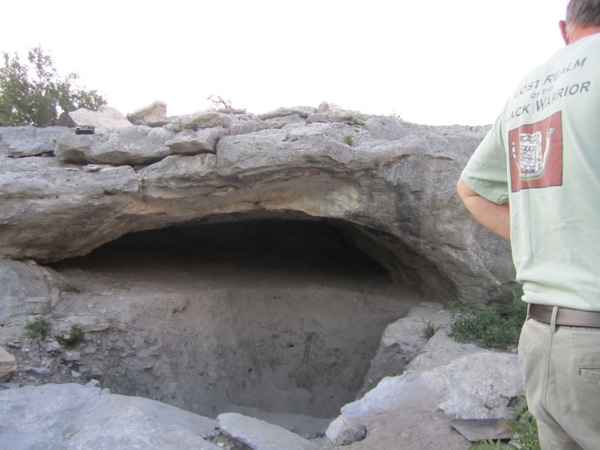 Here’s another site that the field school worked on this year. A shallow rock shelter – they excavated the section you see dug out in front. 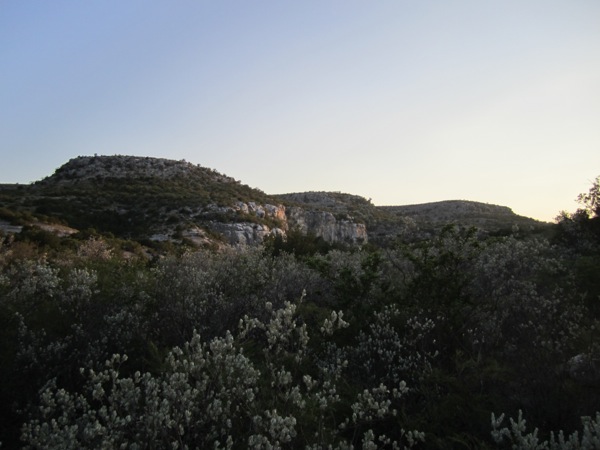 From the bottom of the Canyon

Even the view from the bottom of the canyons is amazing. 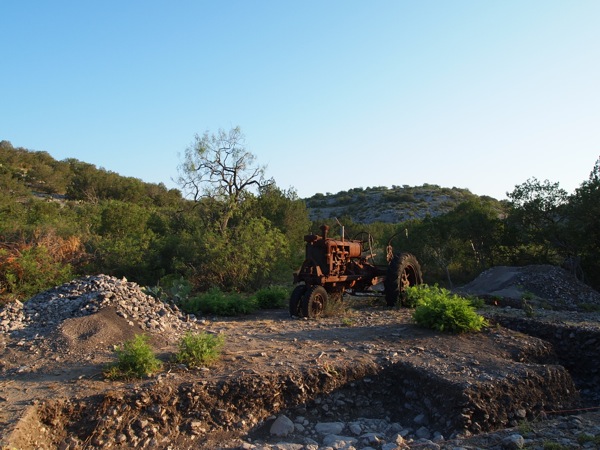 Here’s another burned rock midden site they were working this season – named – of course – Tractor. 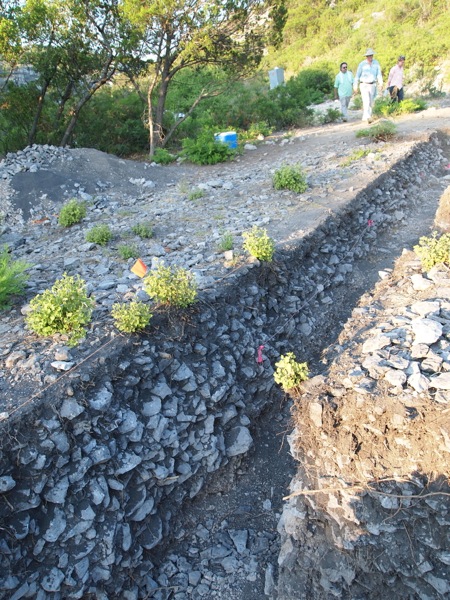 You can see in this trench that it’s solid burned rock down more than a meter – and this is just a medium sized midden site. Kind of gives you an idea how intensely these sites were used – and how important they must have people to the people that used them. 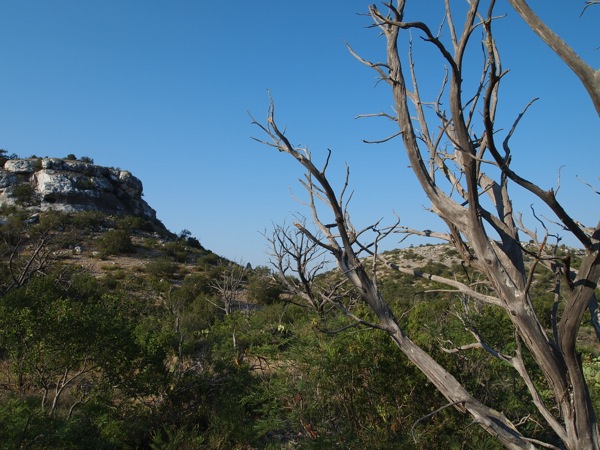 To give you an idea how dry it is down here – these Mountain Junipers died during the drought of 1950-1957. 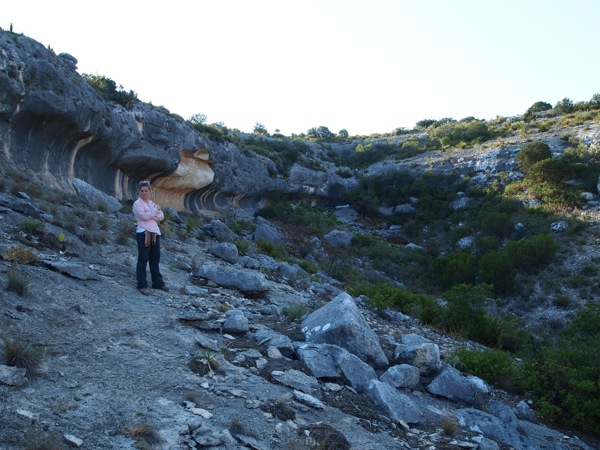 Headed up the slope

We climbed up the back of this canyon to visit this rockshelter site. The area that was occupied is back near the notch at the very back of the canyon. 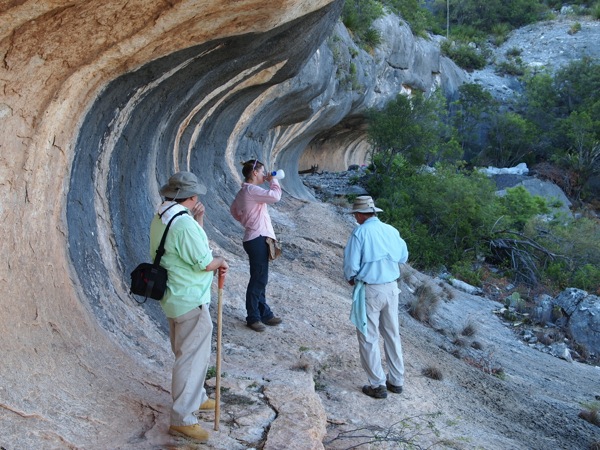 Notice the flat area back were the trees are – that’s the occupation area. 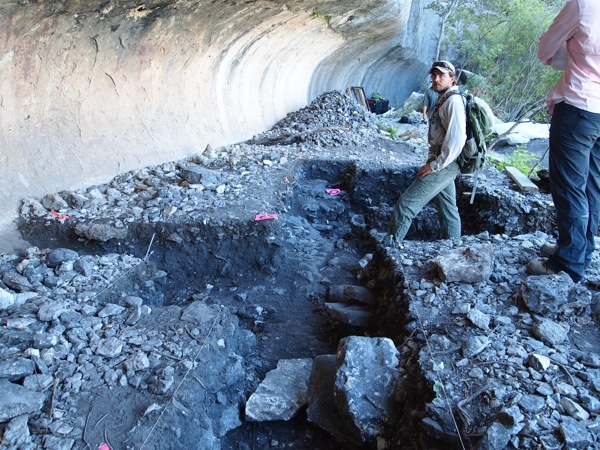 Units in the Rockshelter

And what’s in this rockshelter? A burned rock midden. The crew was just getting ready backfill these units so we got there at the right time. 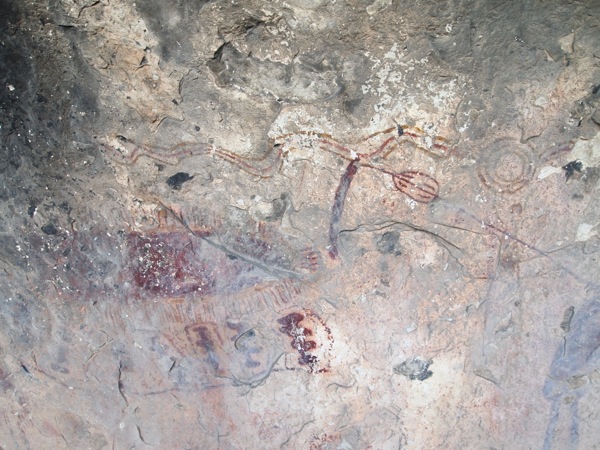 And something you don’t find everyday with a burned rock midden – rock art. The hairy looking thing in the left center is called a Floating Arm – the heavy red vertical stick in the center is an atlatl, and you can see the fletching on a spear that is being thrown through an anthropomorphic figure on the right. Pretty neat stuff. 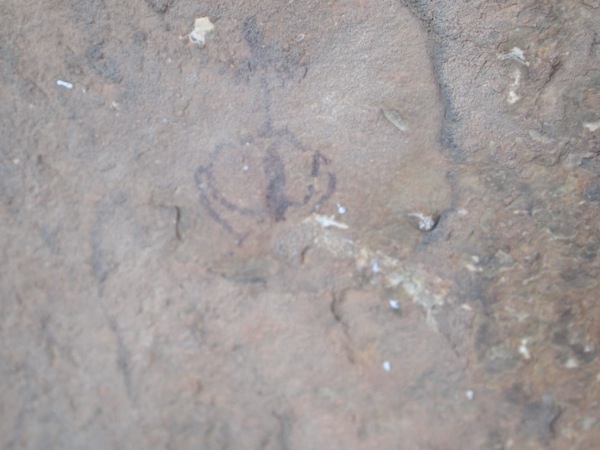 This Bison head is probably the oldest rock art at this site – up to 6,000 years old. There are 3 different styles of rock art present spanning 6,000 to about 1,000 years old. 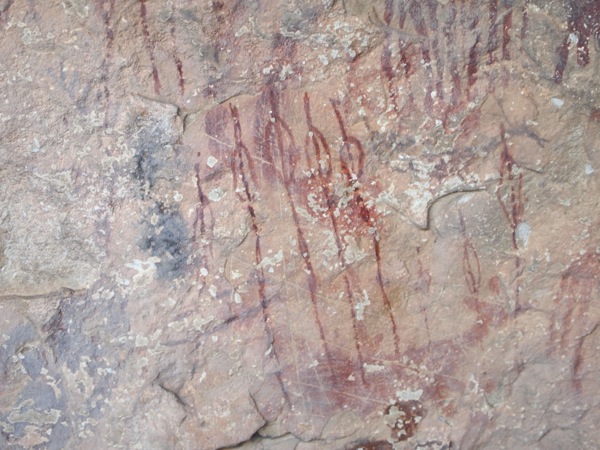 This panel of spears is really neat. You can see the fletching and the nocks on the end.  One really interesting thing that is going to be done here is they will be radiocarbon dating the panels and getting radiocarbon dates from the burned rock midden. There are no dates in the Lower Pecos for both rock art and other activities from the same shelter. 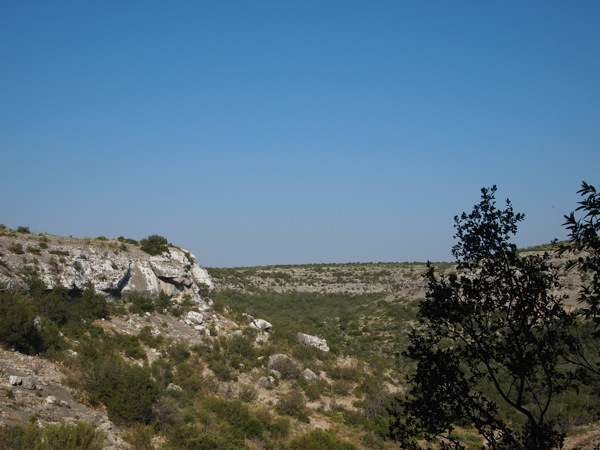 View from the Shelter

Here’s the view from this shelter. Easy to see why someone would plant themselves here. 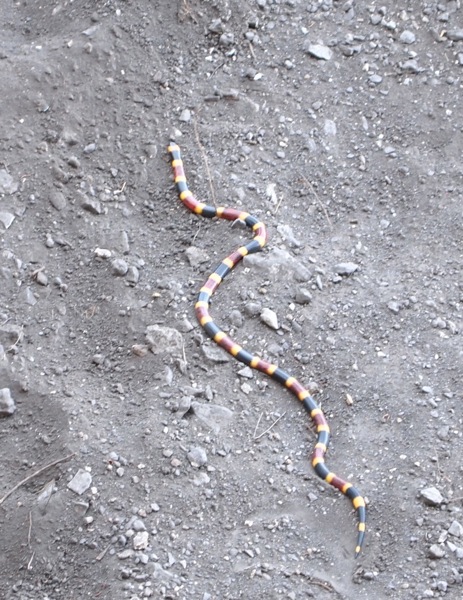 Red and Yellow Kill a Fellow

But you gotta watch exactly where you put your butt, while we were talking this coral snake crawled across the back dirt pile. 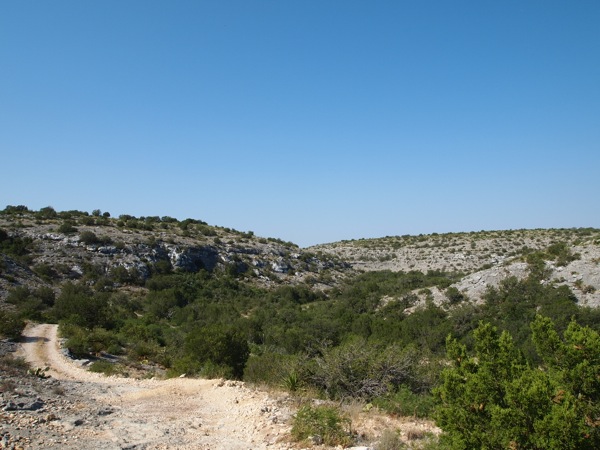 Headed back out of the canyon. 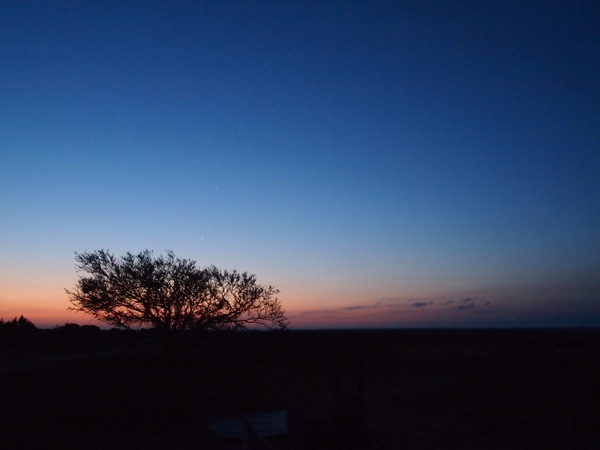 Excellent trip. Now I have to go fix my alternator.

This entry was posted in Just Ride. Bookmark the permalink.

One Response to Deadman’s Creek