The area around La Grange, Texas was settled in the last half of the 19th century of Czechs, Moravians, Bohemians and Germans. And aside from excellent sausage and smoked meat these folks also brought a tradition of painting the insides of their churches which is just spectacular.

So, UralCT (Charlie), Old Timer (Barry), Tripper (Tripper) and myself scootered on down there to eat a little BBQ and check out some of those churches.

This might have been the best day of the year to be out riding In this part of Texas. Weather was perfect, the wildflowers were out in force. Barry, Charlie, and Tripper camped out at Lake Sommervile. I rode down from Austin and made a loop around the metropolis of Bastrop along a couple of nice county roads. 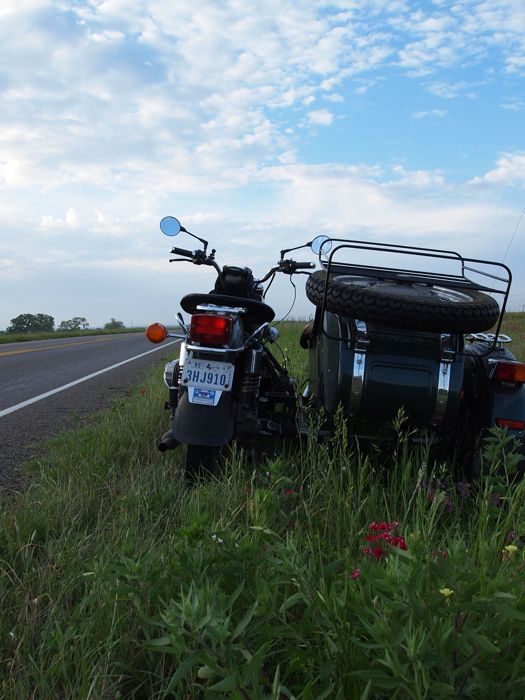 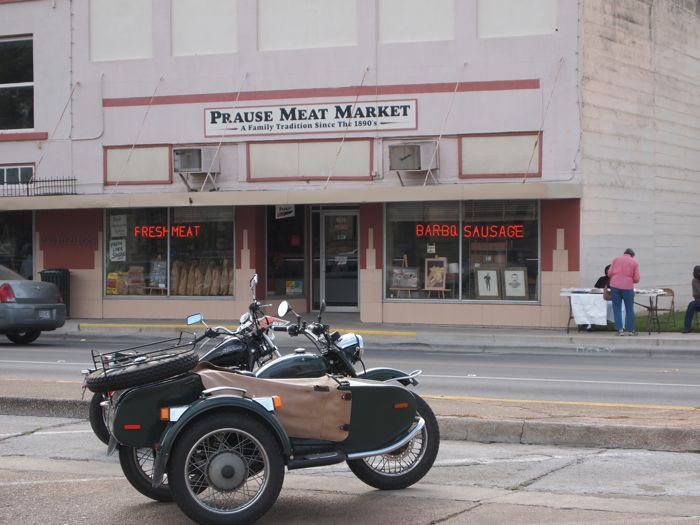 It’s right across from the courthouse. 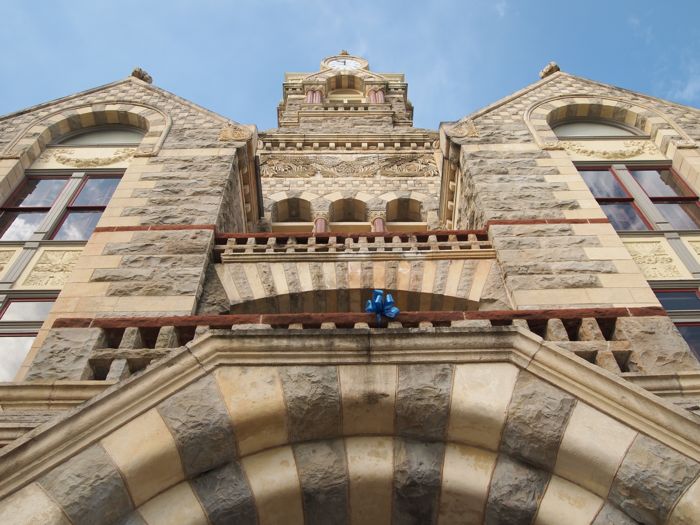 You can smell the oak smoke from the BBQ pit all around the courthouse square. Every county should follow this model. The meat market is in the front, and the pit is in the back – 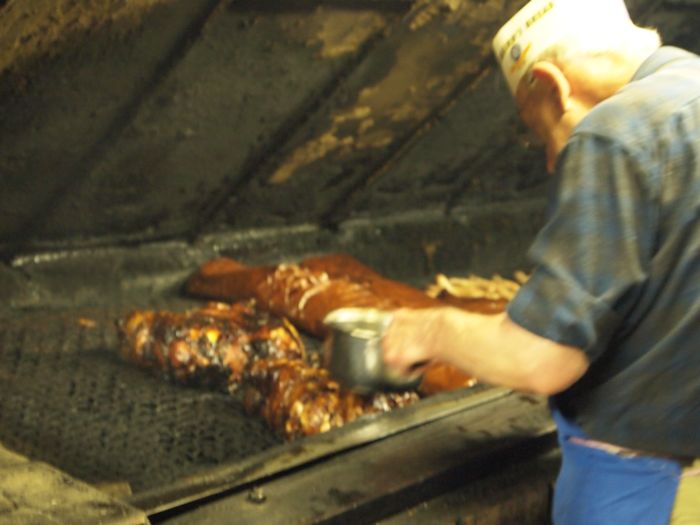 And you eat in between. A nice plate of central Texas BBQ. 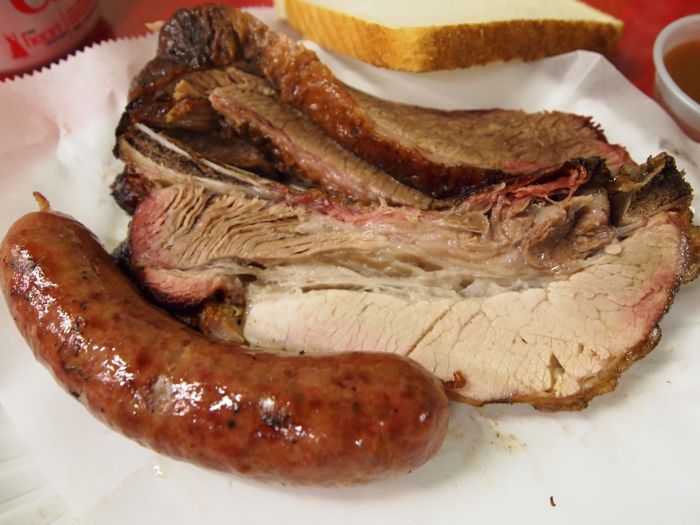 The pork ribs here were back ribs – with a nice hunk of loin still attached (see the big hunk of juicy white pig attached in the picture.) You don’t ever see these in a regular BBQ joint – just in places like this where they cut their own meat. It was excellent. The sausage was really, really good. Coarse grind, a little on the lean side (read not greasy), well seasoned with some garlic, which is a little different in this area. I’d say this sausage is right up there with Gonzales Market. The brisket was good. 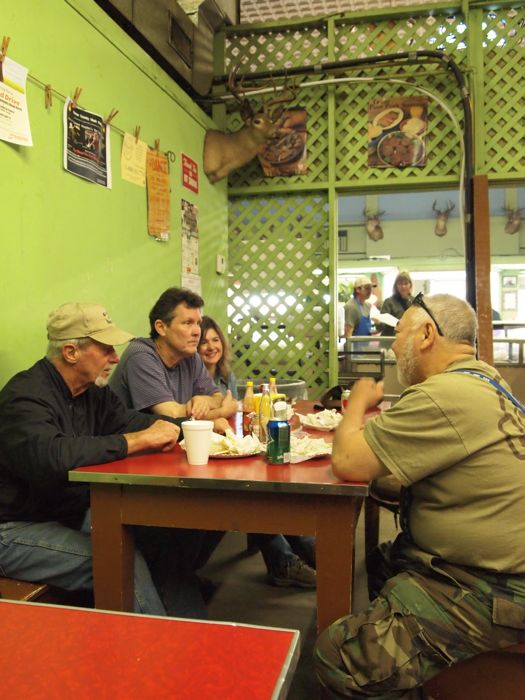 As you can see everyone had a hard time choking down the BBQ. There’s Barry and Charlie on the end and a couple of friends from Austin – Dan and Stephanie – who joined us there.

So, with a load of BBQ on board, we took off to check out a few of these painted churches. It was about an 80 mile loop, and we ended up in Fayetteville at the end of the day for cobbler and coffee. This was our route. 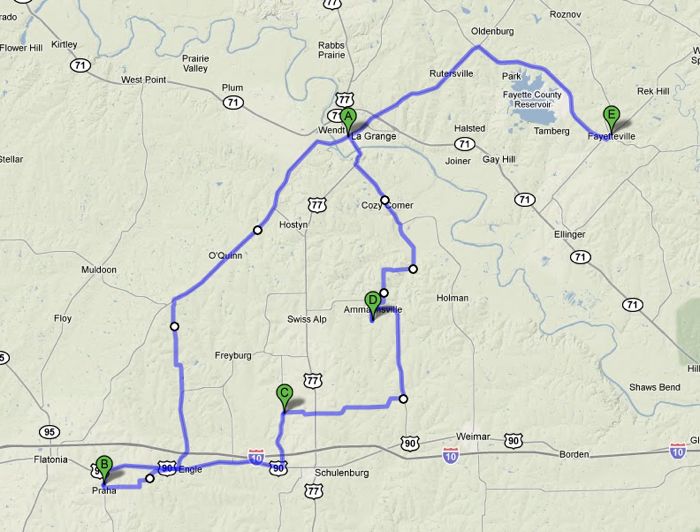 The wildflowers were amazing – driving down these 1 lane county roads with bluebonnets spilling over onto the pavement was like plowing up a bow wave of flowers. 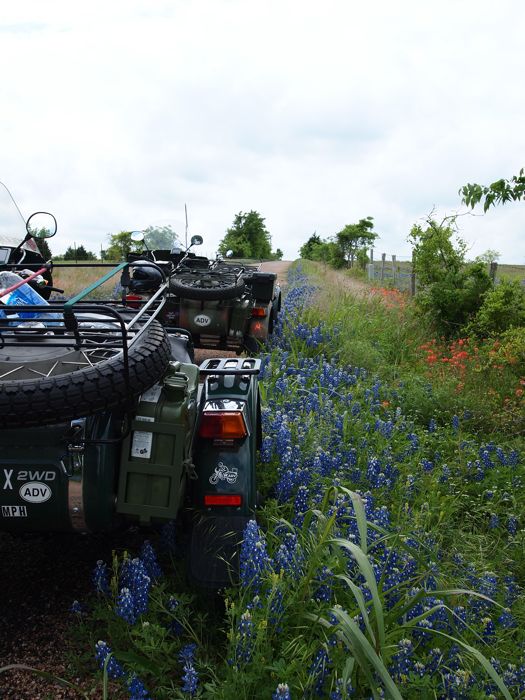 Ok – one more flower picture, then I’ll cut it out. 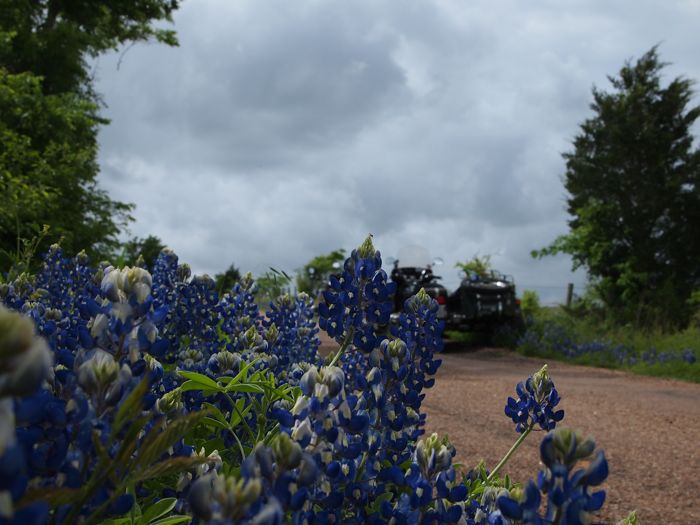 So, about twenty-three miles down the road we get to Praha, and the first church – St Mary’s Church of the Assumption. 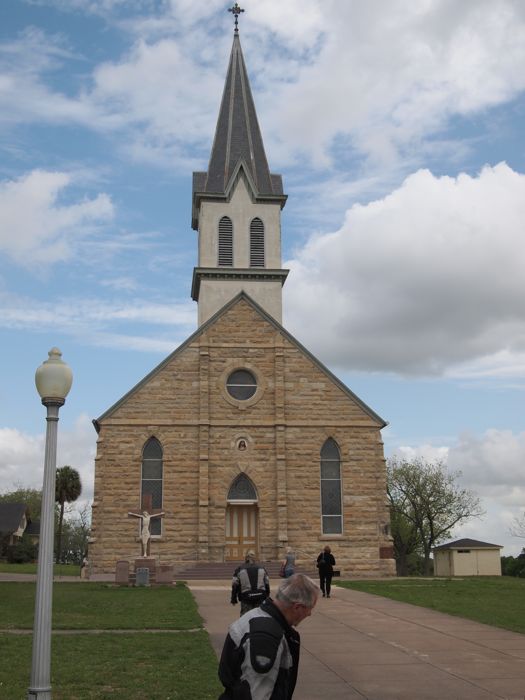 Nice looking country church (built in 1895), you open the door and walk into the chapel. 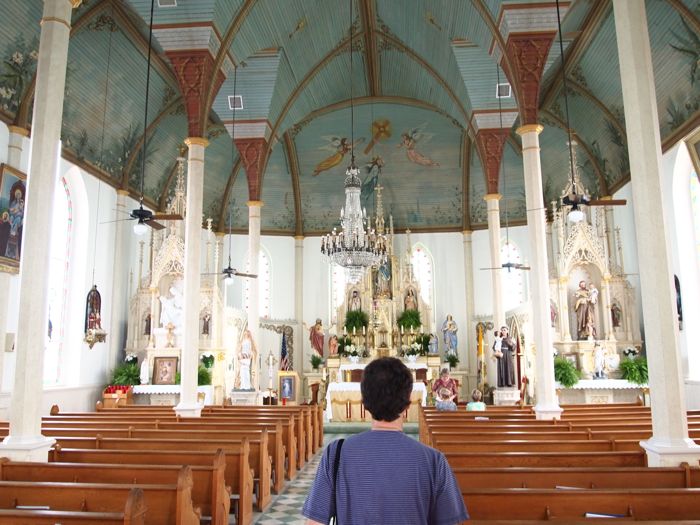 Holy Smokes! the colors were just amazing. The picture doesn’t do it justice. All this decoration is painted. There’s something like 23 different local plants and flowers painted on the ceiling. The colors are amazing. There were quite a few folks visiting these churches while we were there.

These churches were the only thing around in each of these little communities – and now are just kind of out in the country by themselves. The second church was the Nativity of Mary, Blessed Virgin Catholic Church in High Hill, about fifteen miles from Praha. 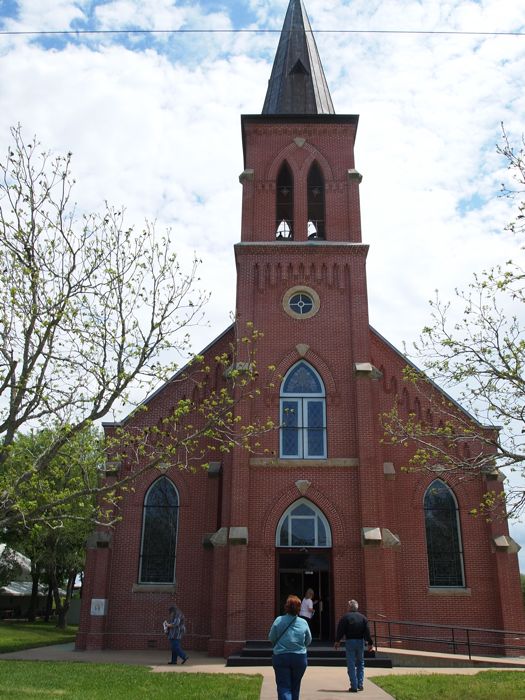 This one was even more spectacular than the first church. 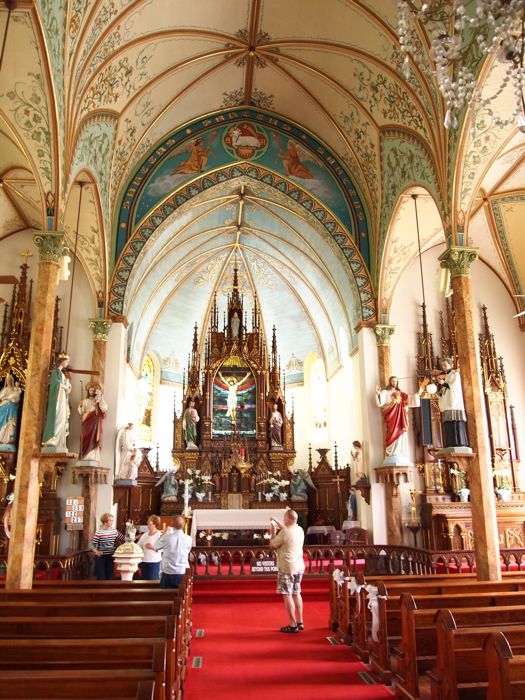 Barry and Tripper taking a break in High Hill. 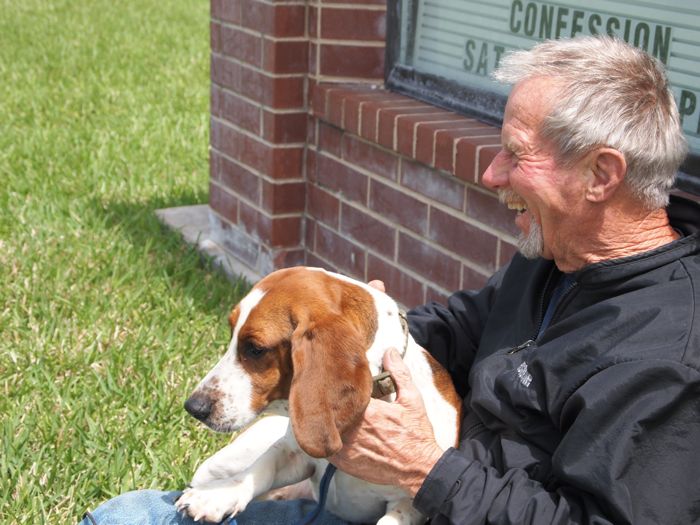 On the way to the next church in Dubina we stopped at the Dubina Piano Bridge. This is an 1885 piano truss bridge – in really good shape. 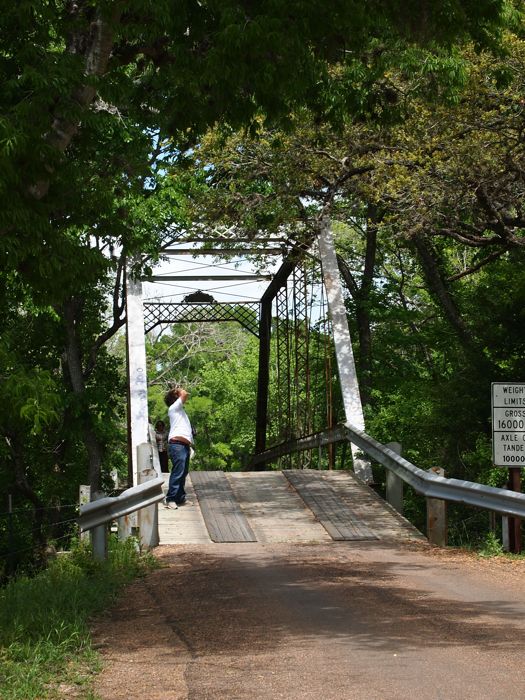 Not a lot of these bridges left in Texas that you can still drive over. 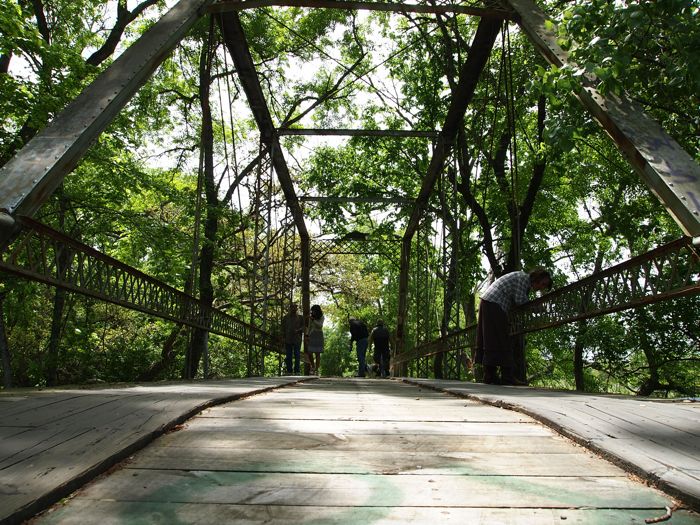 I couldn’t hear in on my Ural, but Stephanie said the bridge made plonky piano noises when she drove her car over it.

Ok – I said no more flower shots – but there was a nice patch of bluebonnets right where we pulled off the road here – so just one more. 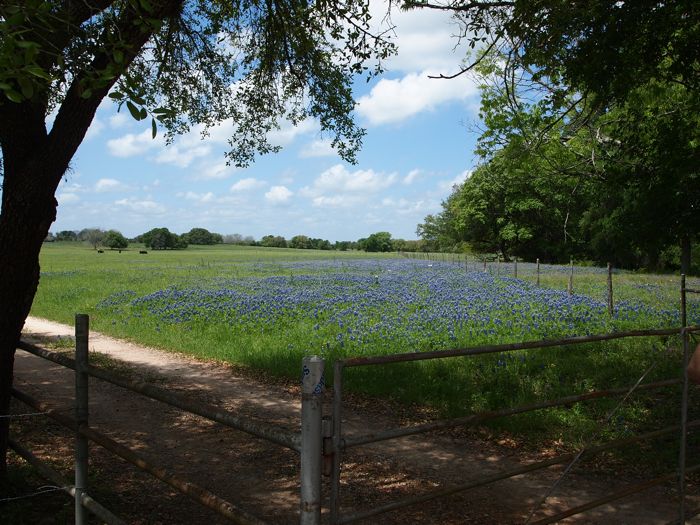 And just up the hill from the bridge is the Saints Cyrill and Methodius Church – it looked amazing as you rode up the rise and it popped up in front of you. 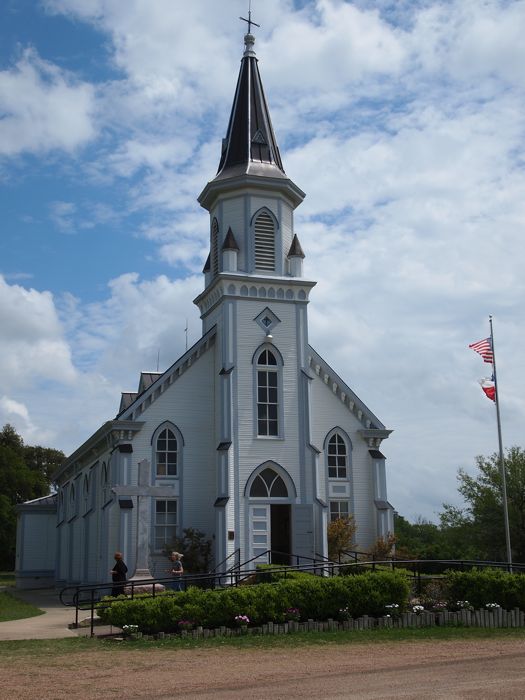 And one more church shot just to sneak in some flowers. 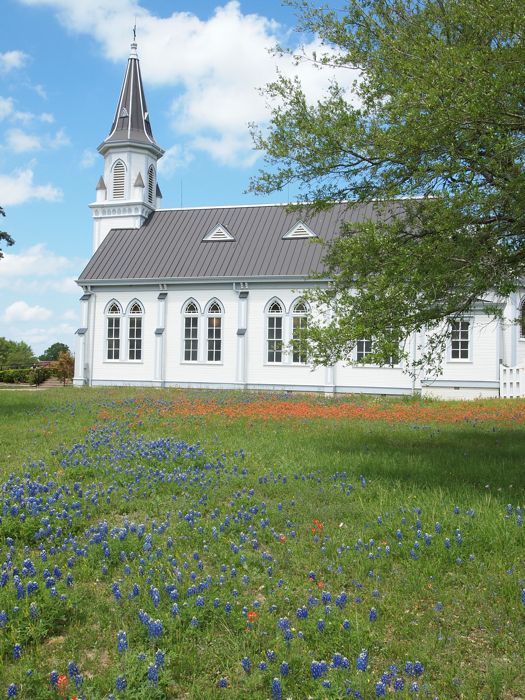 Now the inside of this church was interesting. In the 1950’s the ladies of the church whitewashed the inside to “clean it up” for some church function. So, the original decorations were lost. Another church member – a judge – decided they needed to re-paint it. The church said fine – knock yourself out – but didn’t give him any money or help. He did the painting – and while it’s spectacular, it’s nothing like the original decorations. 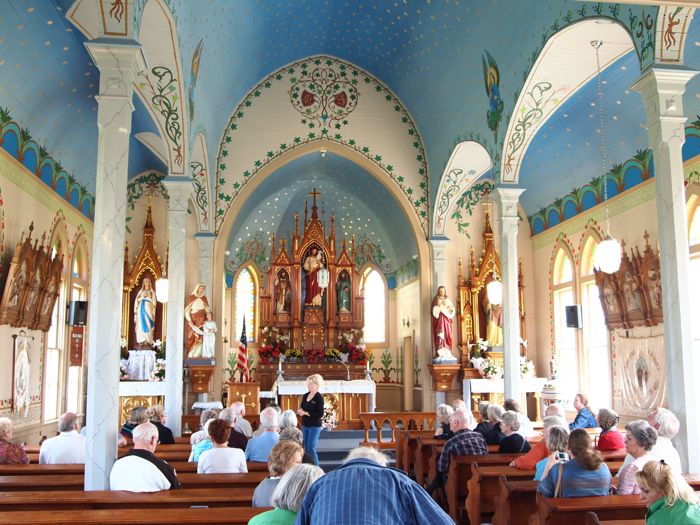 The next church is just a few miles away from Dubina – St John the Baptist Church in Ammansville. 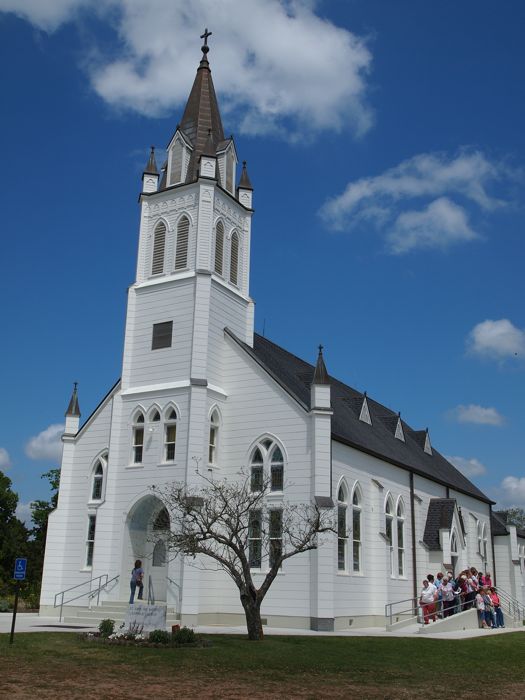 The inside of this church (again hard to tell the real color from the pictures) was pink. First, only, probably last church I’ve ever been in that was pink inside. 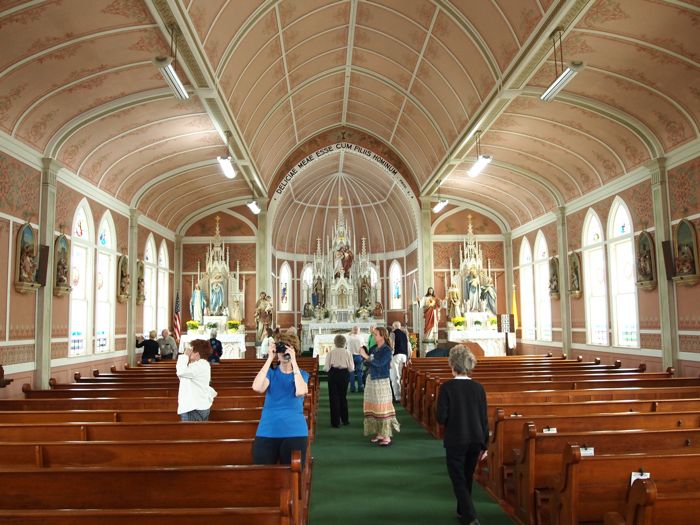 This was a Czech church, so I’m guessing the wording on this station of the cross is in Czech. 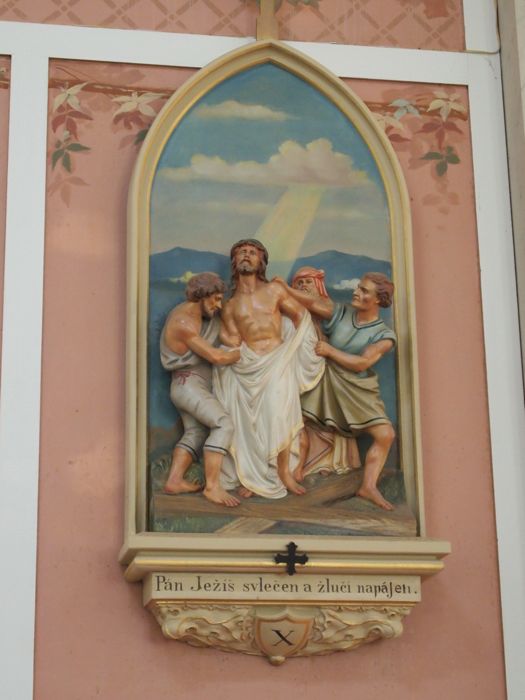 There was a tour bus from Ft Worth visiting the churches while we were there – so lots of old ladies taking pictures. (And lots of UDF as the old men wandered over to look at our scooters). Charlie smiling as he thought about some cobbler and ice cream in Fayetteville. 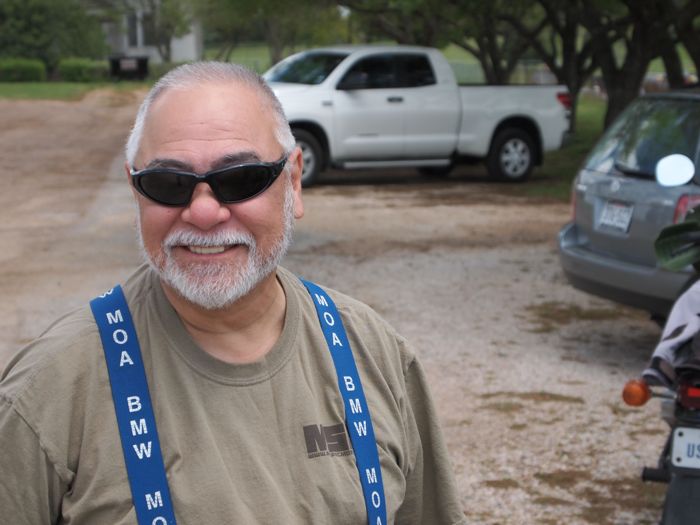 Heading out from Ammansville to Fayetteville we took Boushlav road which was the road of the day as far as I was concerned – nice high speed dirt, rolling hills – perfect Ural highway. 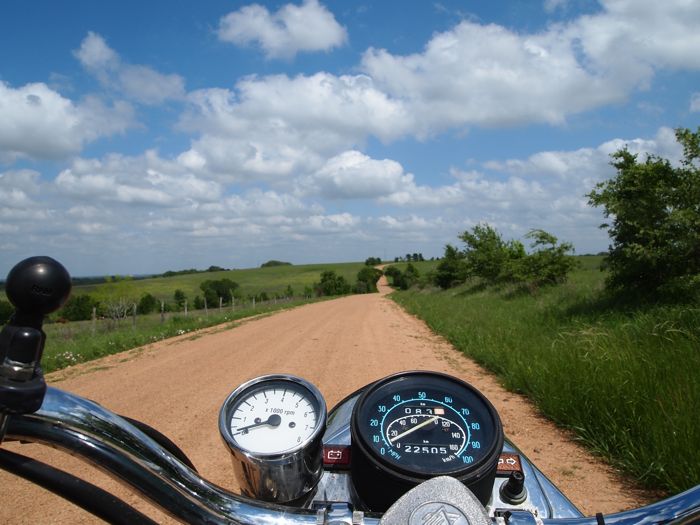 It was a great day for riding.

This entry was posted in BBQ, Just Ride. Bookmark the permalink.