Took a ride with a couple of Ducatista buddies out to Washington Texas for one excellent burger.

We rode out 290 East and then cut south at Paige to run on some Farm to Market Roads then (hopefully) cut up through Round Top and follow the old La Bahia Road all the way to Washington. 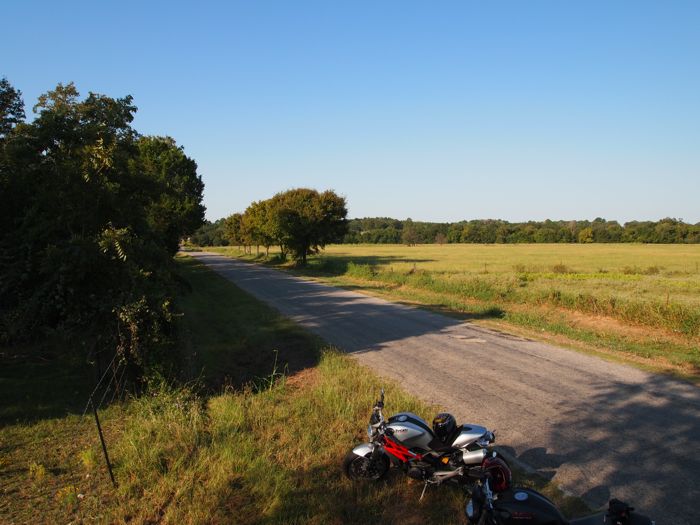 A Russian and Two Italians  – I know there is a joke in there somewhere . . . 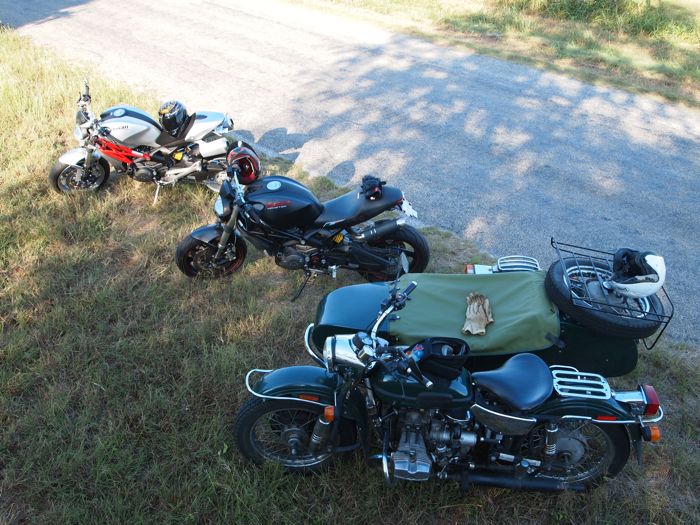 We made it to Highway 237 to run into Round Top, and the traffic was backed up as far as we could see – which is kind of unusual for a 2 lane road out in the middle of almost nowhere – so we hooked a U and tried to work around the jam. I found out that today my main tank had 170km of unleaded – and luckily the reserve had another 23km which got us into Carmine.

David decided that his Italian scooter would handle better with some good Russian air in the tires. 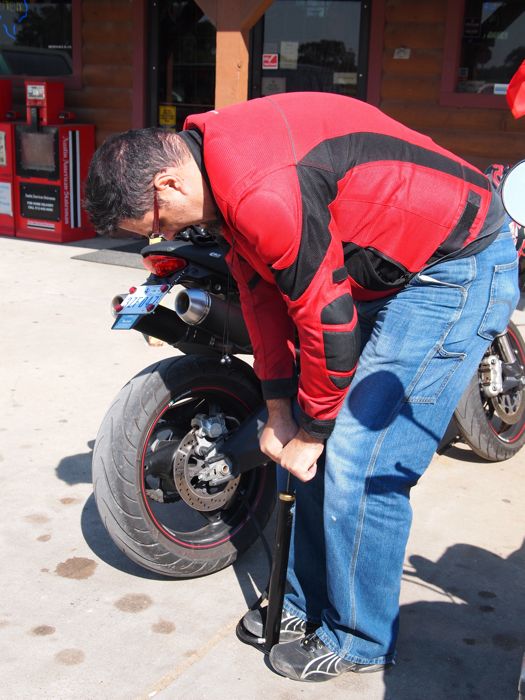 In Independence, TX there’s the remains of the original Baylor University chartered by the Republic of Texas in 1845 As Baylor Female College. Here’s the columns from the original building. (check out info on it here: http://www.independencetx.com/BaylorPark.htm 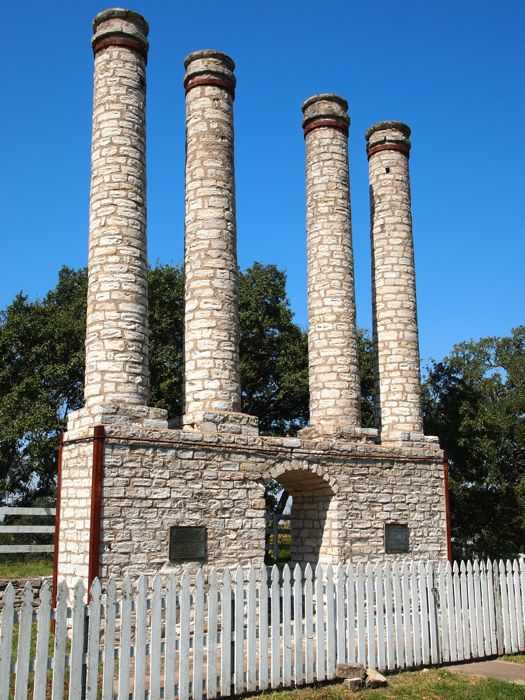 And Mark and his Italian scooter 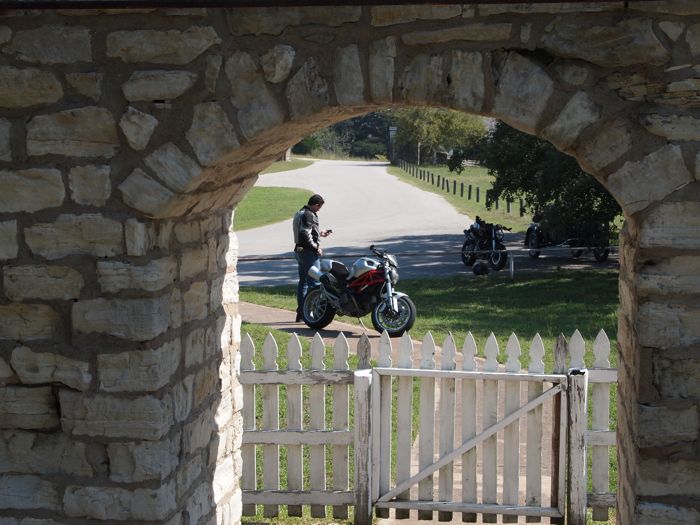 There are a few other ruins there on the site – 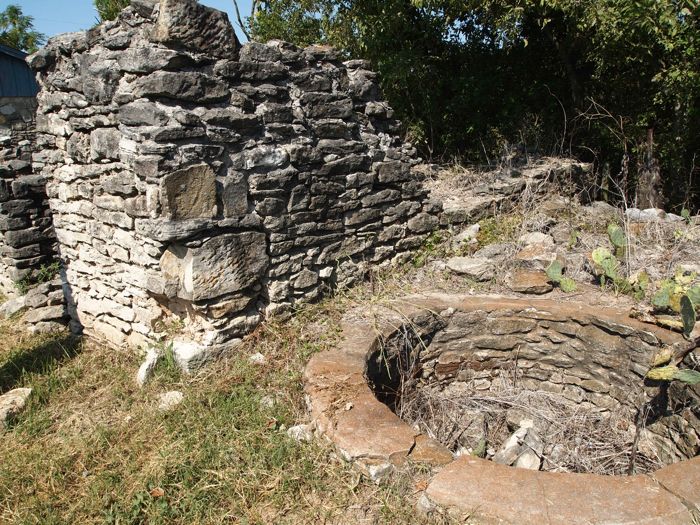 And you can still see the chisel marks on the stones that were dressed for the corners. 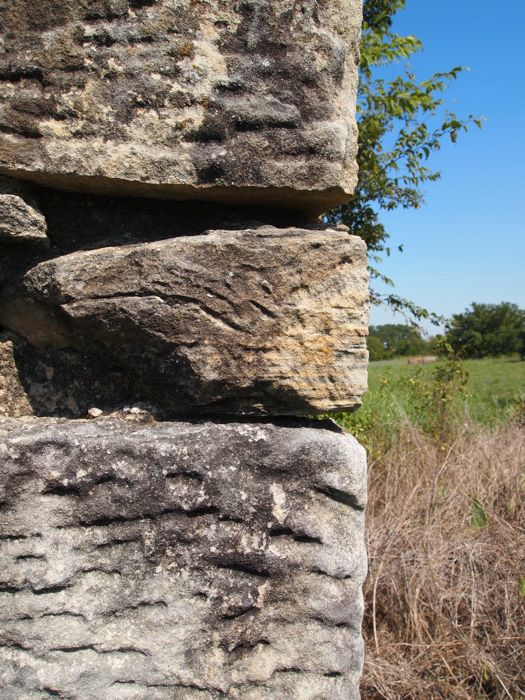 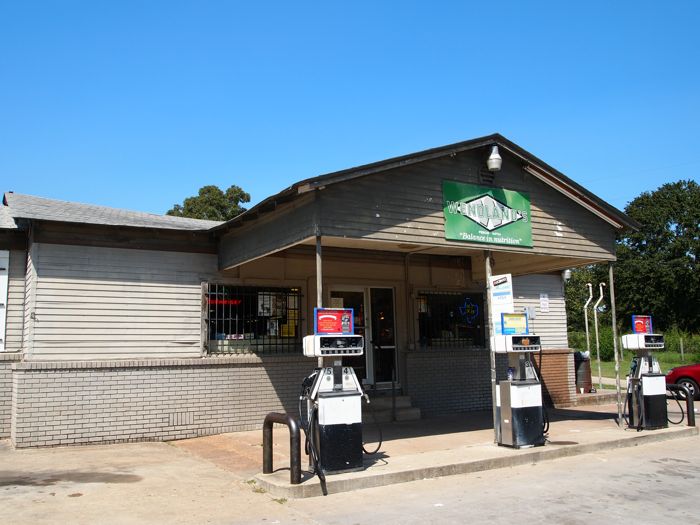 They cook up a big,  mean burger, and excellent tater tots. The burger was fresh cow, hand formed, had to be over half a pound, fresh cut veggies, four friggin pickles, big thick slices of onion – definitely worth the drive. 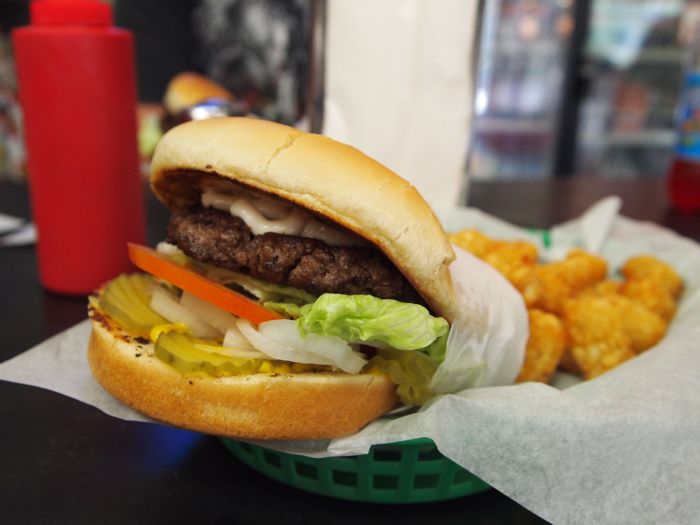 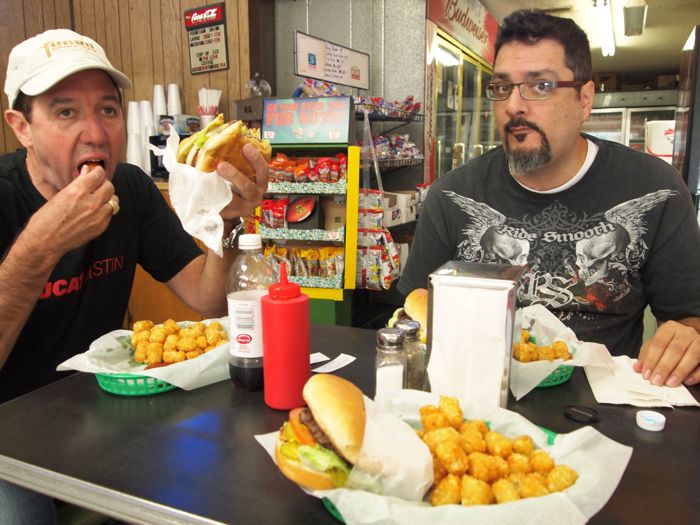 After inhaling the burger we did a little loop over past Washington, and back to Independence. 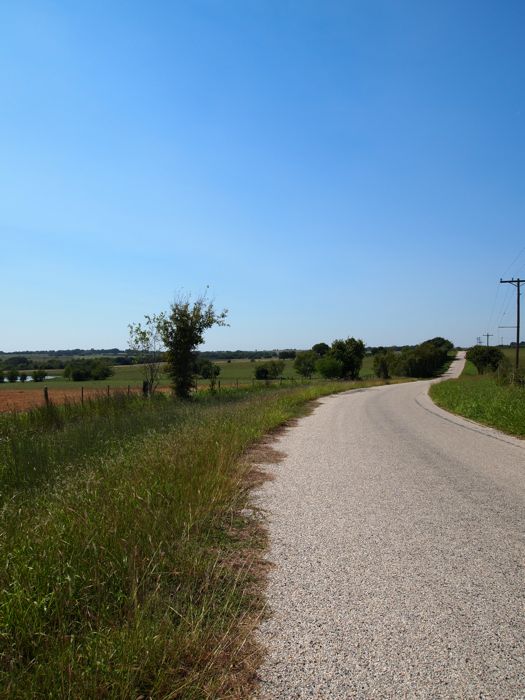 And back down FM390 (La Bahaia Road). In Old Gay Hill (ok – more jokes), a neat old 1 lane brick arch underpass under the railroad. The arch is 4 courses of brick – my father-in-law was a mason – he would have been here two hours checking out the work. 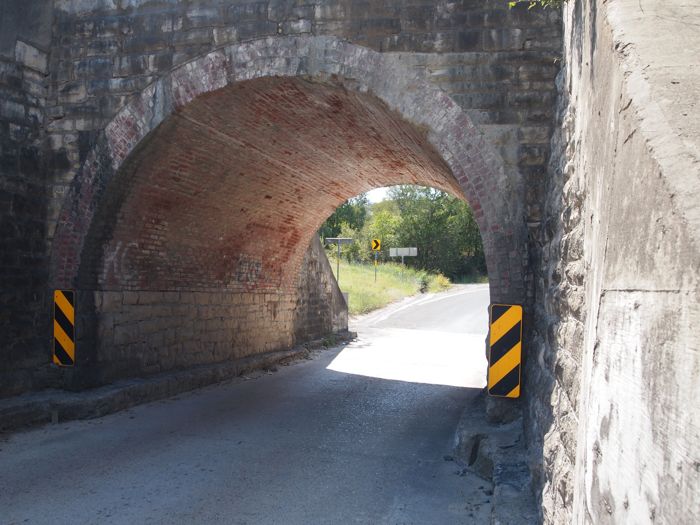 We split up back in Burton and the Ducati boys flew their scooters home at warp speed. 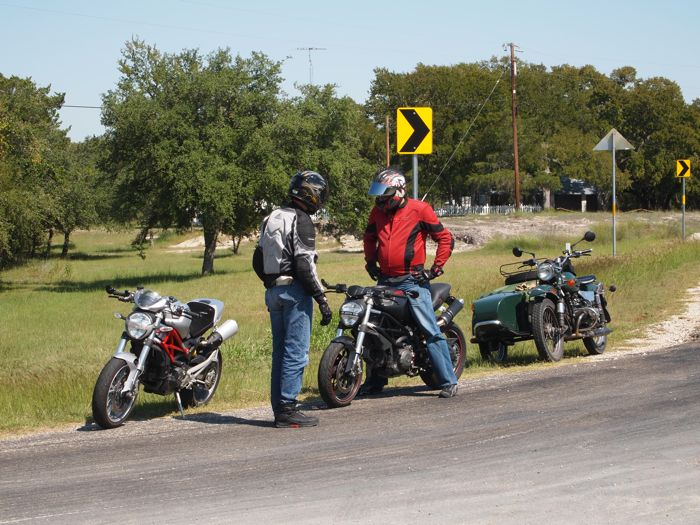 I stopped at the Burton Farmers Gin. This is a working cotton gin and museum – they still gin cotton here using the old equipment – and gin cotton for other museums.  Nice cotton scale — 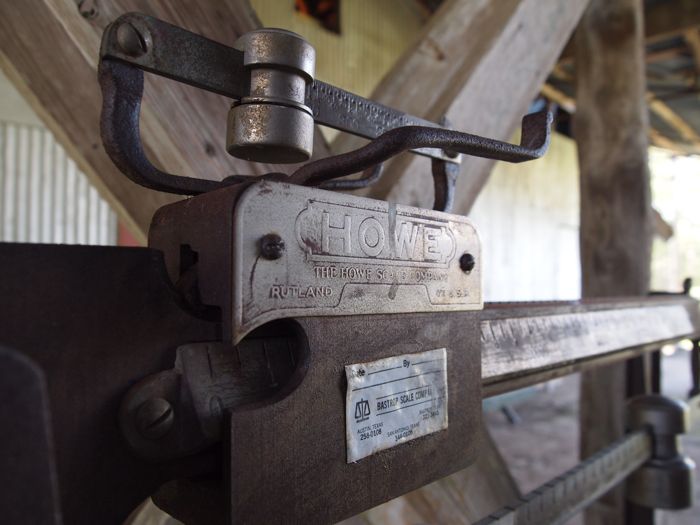 They run the gin on this 125 HP two-stroke semi-diesel engine – I would like to see this cranked up. 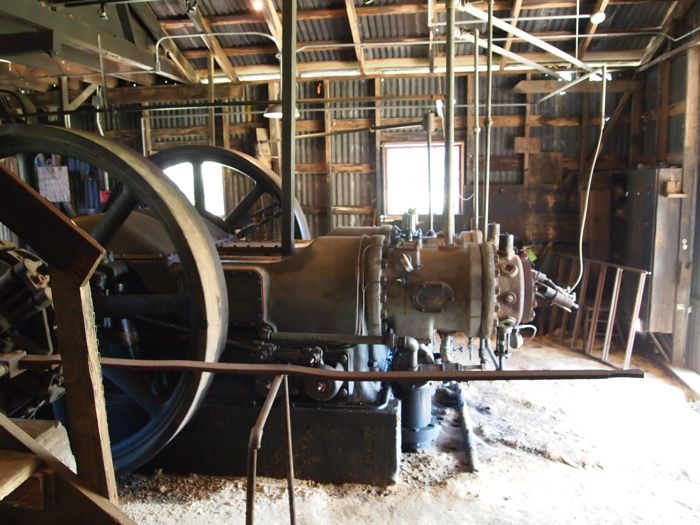 Here’s the clutch/tranny – with a no doubt about it shift lever – this would look good in a Ural. 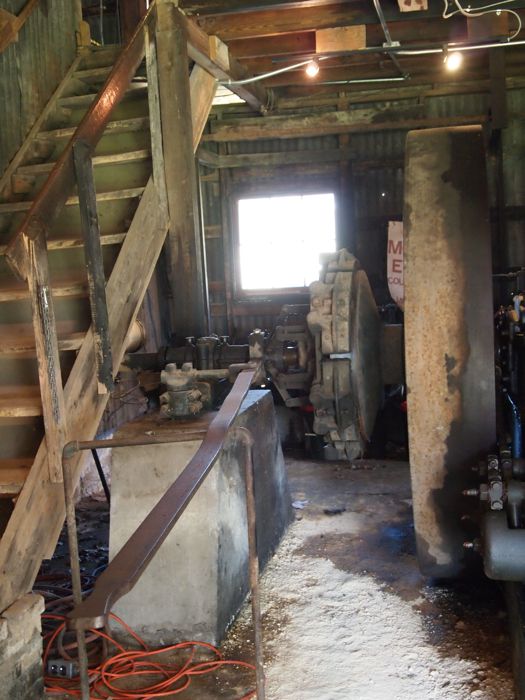 The engine powers the shaft on the right – belts bring the power to the different parts of the gin. You can only see about a third of the belts here. 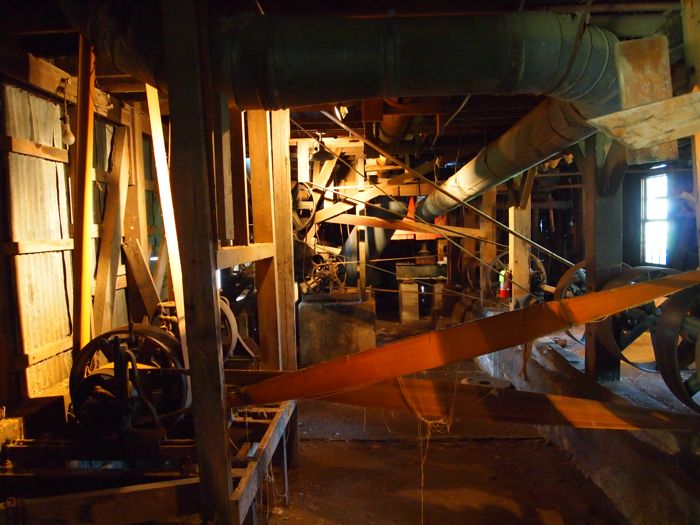 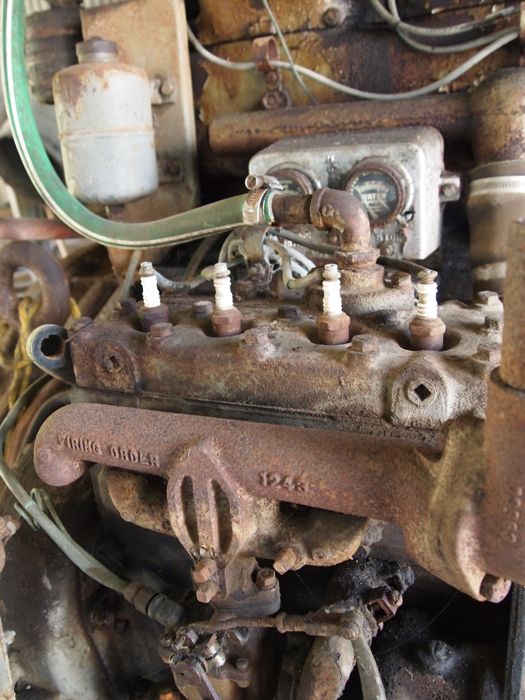 That’s the starter for this 6 cylinder beast 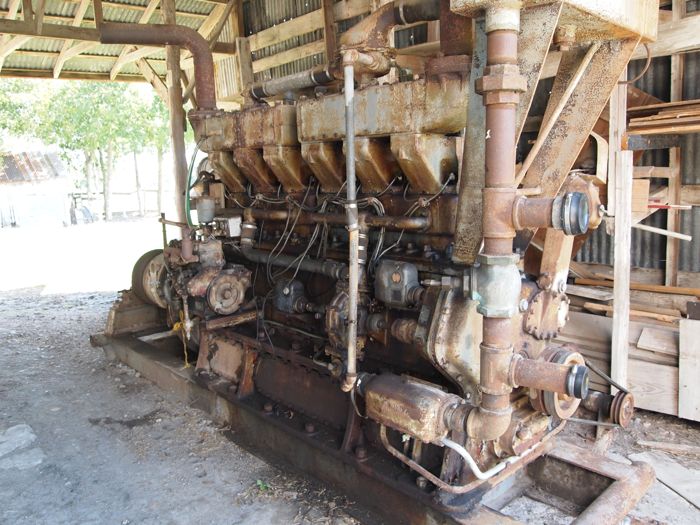 A nice 280 mile out and back. If you’re within a hundred mile of Washington, Texas, and consider yourself any kind of carnivore – get on your scooter and go eat one of these burgers. (B&Js 105 Gas and Groceries, 17255 Highway 105, Washington, TX)